Motorola recently released its Android 8.0 update list last week, revealing that 12 of its smartphones will be getting the highly coveted upgrade. However, the Moto G4 series was glaringly missing in spite of it being less than 18 months old and prior assurances that it would get promoted to Oreo.

Motorola is naturally getting a lot of flak for this from Moto G4 and Moto G4 Plus owners. Even worse, the company seems to have scrubbed all references to this from the internet. A Reddit user has now compiled multiple instances of the brand promising an Android O update.

First, he dug up an old poster for the Moto G4 lineup which features the damning sentence ‘Moto Pure phones like the Moto G4 Plus will get upgraded to Android operating system versions N and O.’ Amazon India’s current landing page for the phone has the exact same infographic, but without the reference to Oreo.

There’s also a YouTube video which scrolls through the Amazon India listing from back when the Moto G4 Plus first arrived. It clearly includes the reference to Android O 55 seconds in. A Spanish brochure for the same device includes the same wording, so it was clearly a global assurance.

Motorola itself seems to be in a state of confusion over the upgrade. As recently as September 15, a Twitter user asked Moto India whether the Moto G4 Plus will be getting Android 8. The account said that it would, but that tweet has since been deleted. 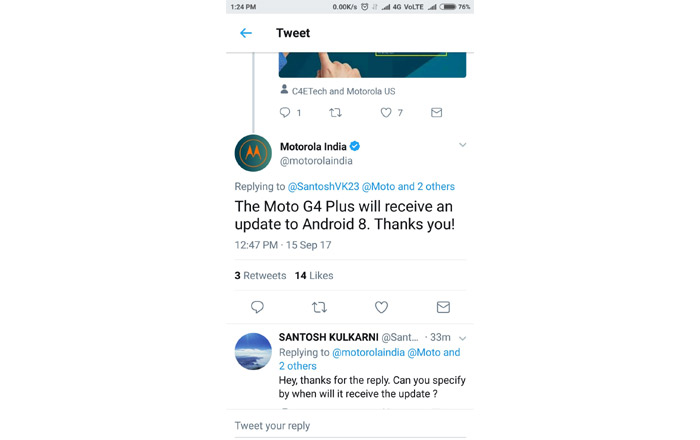 The Reddit user ends his post by questioning whether consumer protection laws would apply here since Motorola falsely advertised the Moto G4 Plus as getting Oreo. It’s possible the company meant to roll the OS out but changed its mind later. If so, it’s time the brand made its reasons public.