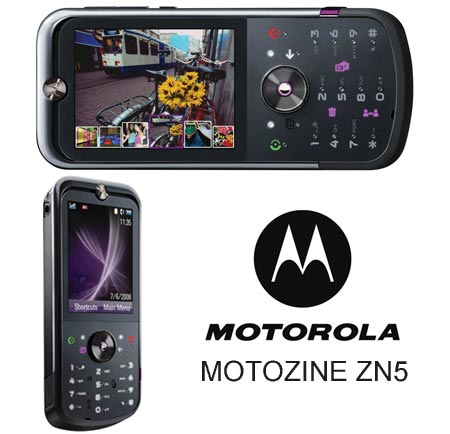 Motorola today announced the Indian launch of MOTOZINE ZN5. This phone was developed in association with Kodak. The ZN5 is the first phone to combine Motorola’s “ModeShift Technology” and KODAK “Imaging Technology”.

In addition, the new mobile phone is preloaded with Kodak EasyShare software. Moreover, the camera includes an ultra-fast 5 megapixel camera with auto-focus and a Xenon flash. The stylish phone also features multiple capture modes like multi-shot and panorama, which automatically aligns, captures and stitches together continuous shots taken on the horizon line into a single, extended image.

Users can further upload their photos on various social networking sites through ShoZu via Wi-Fi. User can also transfer images on the computer by Bluetooth or USB. Besides, consumers also have the flexibility of sharing pictures on their television set with a TV-out cable.

Talking about the newly introduced handset Ian Chapman-Banks, corporate vice president and general manager, Asia, Mobile Devices, Motorola, “Today’s creative consumers not only want to be the photographer, but also the retoucher, the exhibitor and the critic. With the MOTOZINE ZN5 we allow people to unleash their power of curiosity, creativity, impulse and play, whenever the mood strikes. So go and click, capture and share all you want.”

Other features of the MOTOZINE ZN5 phone include CrystalTalk technology for flawless conversation even in noisy environments and dual compatibility for GSM and Wireless Local Area Network.

The first phone in ZINE series, ZN5 will be available in the India from mid-September 2008. The phone will be bundled with a 2GB memory card and a TV-out cable for easily viewing pictures on a television set.