Motorola still isn’t going to make its Moto Maker tool available for India anytime soon if ever, but it plans to offer two different premium Moto X options at launch anyway, namely bamboo and leather. The phone will also be available in normal black and we might see other choices surface in the future, but these look to be final at launch. 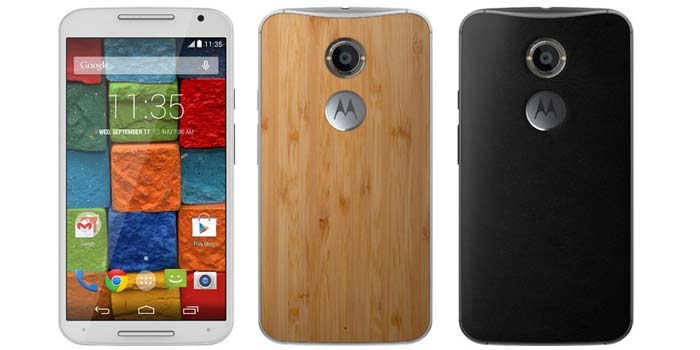 The e-retailer has already put up listings for the aforementioned Moto X variants, but the price is still under wraps. Nevertheless, we expect the phone to retail at around Rs 32000 to Rs 35000. This would make it one of the cheapest flagships.

Also Read: Samsung Galaxy S5 mini dual SIM out now in India, but only via Flipkart

While the original Moto X fell short where specs were concerned, the latest model is at par with the competition. The phone offers a 5.2-inch 1080p OLED display with Gorilla Glass 3 and a 2.5GHz quad core Snapdragon 801 chipset. Memory provisions remain the same, but the cameras have been improved to 2MP front and 13MP rear.

A quick look at the new Moto X specs:

More information on the second generation Motorola Moto X can be found on Flipkart.

Facebook
Twitter
Pinterest
Linkedin
ReddIt
Tumblr
Flip
Previous articleZTE’s ZMax is not a flagship phone, but it’s got great specs at a budget price
Next articleAnother leaked photo of Oppo N3 tells a different story about its design