It looks like Motorola will be adding a new customization option to its list of premium rear panels for the Moto X flagship. The upcoming design will be inspired by a football (American) and it should arrive during the third week of November to please NFL fans.

An image of the football leather back panel for the Motorola Moto X was posted online by Phandroid which claims to have received it from a tipster. The website notes that the custom backdoor looks and feels like a traditional football (American). As you can see in the image below, the phone is shown with Verizon branding. 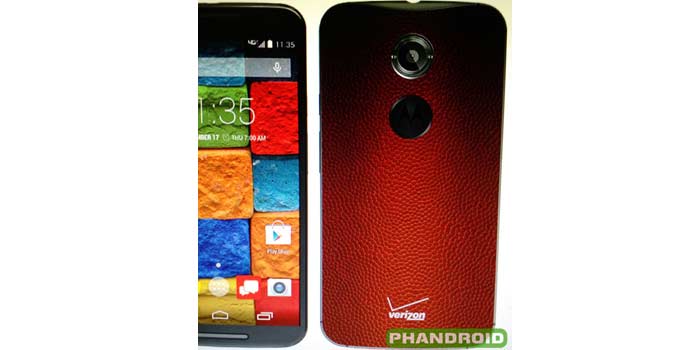 This suggests that it could be a carrier exclusive launch, albeit there’s no conformation on that as yet. To add credence to the leak, the website also goes on to say that the same company which supplies Motorola with leather back panels for the flagship phone is also a supplier for NFL footballs.

This means that the backdoors might just be made of the same materials used for the real thing. The new Moto X is a major upgrade over the previous release and it’s expected to receive Android 5.0 update soon along with other phones in the company’s lineup.

Here’s an overview of the Motorola Moto X’s key specs:

Where a price is concerned, there’s no word on how much the football leather back panel for the Motorola Moto X will sell for, but it might cost you an additional $25 which is what you have to shell out for the current leather options.