Motorola Moto X price confirmed, coming to all major carriers in the US

The Moto X is official after months of speculation and Motorola has announced its arrival in the US as well as price for all major carriers. Affixed with a mid-range price tag, the device doesn’t have most of the top-tier components found in current flagships, but Motorola has designed it with a plethora of alluring features. Apart from this, the smartphone can be custom designed, allowing you to chose details such as the color scheme, the front and back panel layouts, the internal memory and a custom printed name or message.

The company has certainly taken a unique approach with the Moto X. To custom design the phone, the Moto Maker online studio has been created where buyers will be able to make different design combinations. The handset will also be offered with wood back panels later this year. As leaked before, the device comes with an always-on feature, Touchless Control, where you can carry out various tasks through voice commands without even laying a finger on the phone. Rumors have been spot on with the hardware components. The phone features a curved back panel which measures 5.6mm to 10.4mm thick, for a comfortable grip and it weighs 130 grams. 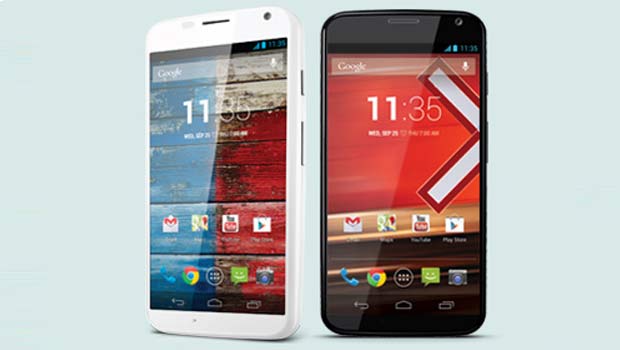 The display is of AMOLED type measuring 4.7 inches wide and proffering 720p HD resolution. On the inside, the Moto X has a 2200mAh battery that can deliver around 24 hours of mixed usage, 2GB of RAM, 16GB of base storage and the X8 mobile processor which is a modified S4 Pro with dual cores. Those purchasing the phone online will be treated to 32GB of internal memory. And for connectivity, there’s Wi-Fi 802.11a/g/b/n/ac, Bluetooth 4.0 LE, HSPA+ and 4G LTE.

The Moto X will be available by the end of the month or early September through Best Buy as well as major carriers such as AT&T, Sprint, Verizon Wireless and T-Mobile for around $199 with a new two-year agreement. US Cellular, on the other hand, has started accepting pre-orders for a price of $124.99. The phone will also go on sale in Canada and Latin America at around the same time.