Motorola is continuing to amaze us by not only bringing Android Lollipop to its latest Moto G smartphone, but also last year’s model in just under a month of the OS being officially released by Google. The 2013 version which is also the original smartphone has started receiving the new firmware in India.

Just so you know, the Motorola Moto G first and second generation phones are mid-range releases. And they are certainly special as most high-end and flagship phones including the ones launched this year are yet to get a taste of Lollipop. An XDA user took to the forums to disclose that the OTA is now being seeded to the dual SIM mobile and it’s so far, only available in India. 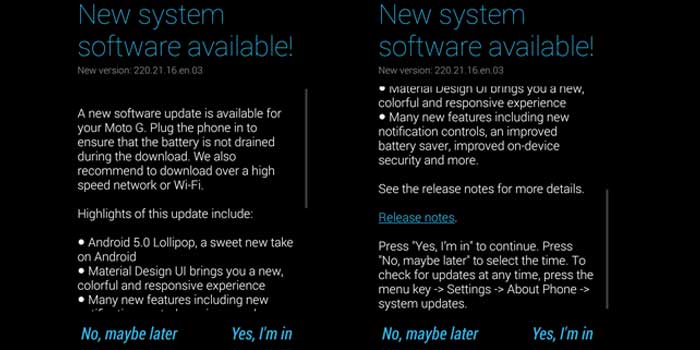 Certainly, devices in other locations will be receiving the update soon. The company has also published release notes for Android Lollipop which discloses what new in the release. Apart from the expected enhancements like the Material Design UI and apps, lockscreen notifications and better battery saving, the smartphone will also be treated to Ambient Display for getting notifications when the phone’s display is switched off.

The new Recent Apps menu and Downtime settings have also been included along with enhanced security. For a complete list of new features included in the update for the Moto G, be sure to check out this link.

A quick refresher on the Motorola Moto G’s specifications:

If you haven’t received the update as yet on your first generation Motorola Moto G, you can manually search for it from the settings menu, under the about phone tab.