Motorola Moto G details leak yet again, to arrive in time for the holiday season

The Motorola Moto G doesn’t know how to keep its details under wraps. Only yesterday we came across its picture and specifications and now another image has surfaced on the web to confirm its arrival during the holiday season. And guess what? The device will be priced at merely £134.95 without a contract.

It was the guys at GSMArena who laid their hands over a promo card which apparently is designed for a Phones 4u store in the UK. And you will be glad to know that the snapshot goes on to reveal almost everything there is to know about the Motorola handset. It even verifies a previous rumor that suggested it will come with exchangeable back covers. 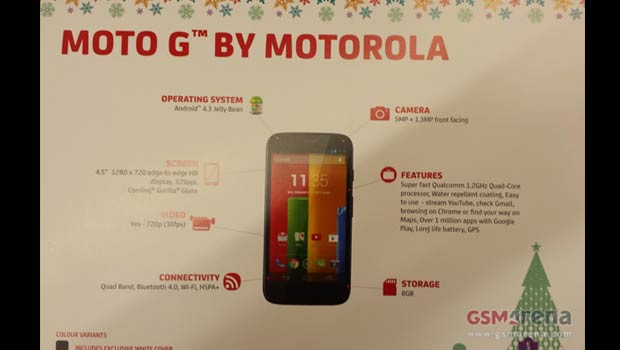 Coming to the specifications of the gadget, it has a 4.5-inch HD touchscreen with a Corning Gorilla Glass coating for resisting scrapes and scratches. The device runs Android Jelly Bean 4.3 out of the box, but we are expecting the KitKat 4.4 update to hit it sometime in the future.

There are dual cameras, but instead of an 8MP snapper, the device will have to make do with a 5MP one. The handset is compatible with 720p videos and has the essential features like Bluetooth, Wi-Fi, GPRS and GPS amongst others. A quad core processor can also be found inside it.

Take a look at the list of its key specifications:

The Motorola Moto G is expected to retail for £134.95 in the UK during the holiday season.