The Moto G (3rd Gen) is contending to be Motorola’s worst kept secret at the moment it seems. Press renders of the upcoming smartphone have managed to seep out of the company’s clasps somehow, giving us a neat look at what the successor to its much popular mid-ranger will look like from the outside.

The front of the device doesn’t have any visible design changes, but the eagle-eyed will indeed notice that the earpiece grill has gotten a bit smaller. Seems as though one of the most loved features of its second-gen model, stereo speakers, will be retained by the Motorola Moto G (3rd Gen).

Its maker has changed the rear surface drastically however, as has been the case with each new generation of the device. This time, a metallic strip extends down from the camera towards the middle of the Motorola handset’s back. These images have come via a French website named Nowhereelse which has a knack of accurately leaking crucial details about upcoming smartphones.

As for the specs, the device in question is not a huge upgrade over its precursor by any means. The display is apparently still a 5-inch one bearing 720p HD resolution, while the SoC has been slightly promoted to a Snapdragon 410, which is weird considering that the ultra-cheap Moto E (4G) too offers the same chipset. A 13MP main camera accompanied by a dual-tone flash is a highlight however.

A quick glance at the leaked specs of the Motorola Moto G (3rd Gen): 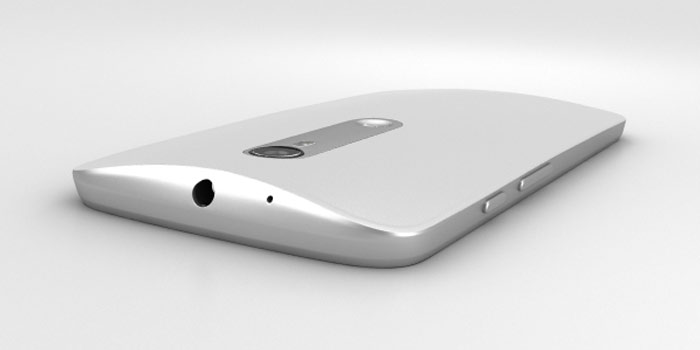 The new Motorola Moto G (3rd Gen) is expected to be unveiled at the end of August or during the start of September. Let us now see howe much more we get to know about it before its launch.