It was just yesterday that Google quietly revealed the newest version of its Android platform, 5.1 Lollipop, and we’re already seeing it already running on the second generation Motorola Moto G smartphone. The Android One program will be first to get the new improvements, but it’s also obvious that other OEMs are also testing the OS.

And this could just be the case with the Motorola Moto G second generation handset. Tech-Droider obtained the image you see below from one of its followers and it clearly shows the Android version number as 5.1. But considering that the build is from February 2, it could be an internal test release. 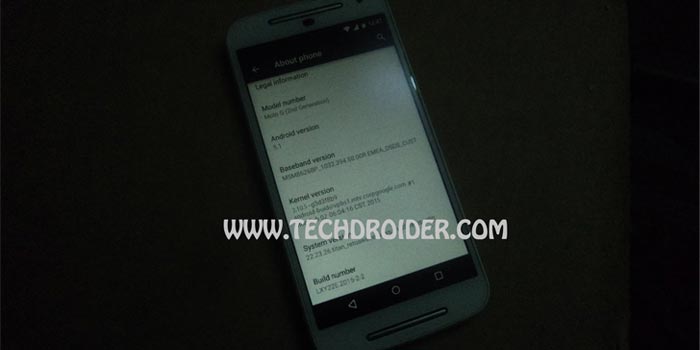 We really don’t know what’s new in the OS as Google is yet to offer a changelog, but reports state that the battery life has been improved along with security. And as you probably know, earlier builds of Lollipop created a lot of issues for non-Nexus phones like battery drain and network problems amongst others, which is mainly why OEMs have delayed the update time and again.

Well, all of the issues should be fixed in the new 5.1 version and we could see devices jump directly to the latest build. The Moto G second generation is yet to get the Android Lollipop in many locations, so there’s a chance that it’ll be treated to the recently launched version too instead of Android 5.0.2.

Motorola will most likely reveal availability details of the new Android 5.1 Lollipop update for the Moto G second generation phone and other devices after Google seeds it to the Nexus lineup.