Ever since the launch of the Moto E, we’ve heard the press speak about it in superlatives more than anything else. ‘Revolutionary,’ ‘best,’ ‘giant killer’ and many such words have been affixed to this extremely affordable Motorola smartphone.

The response from the consumers too has been overwhelming, at least in India. Like the finder of a needle in a haystack, you need to be lucky enough to buy the Moto E off Flipkart during the few hours that manages to stay in stock. After having gallantly succeeded in this feat, we found ourselves in the proud ownership of the said smartphone. We then decided to use it for a few weeks and provide you with a very short and sweet review of it. Here you go. 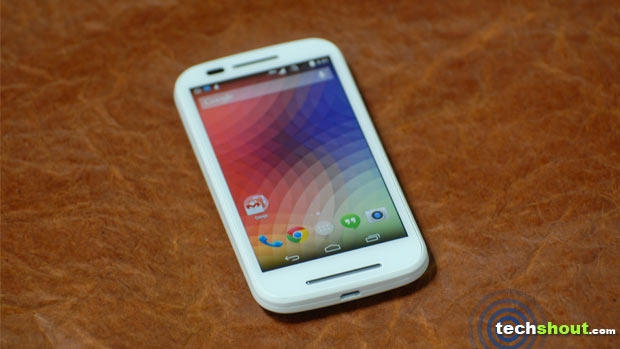 Selling points and how they fare

Motorola has positioned the device as a durable one, granting it a Gorilla Glass 3-coated display and protection against splashes of water. The latter we did test and can gave a thumbs up to, but the former we didn’t feel the need to examine since the particular surface is indeed a strong and capable one as we’ve observed on past devices. Our Moto E did survive one big and two medium falls without taking any damage to its body or screen.

That the phone runs the Android 4.4 KitKat OS is a big advantage, and that’s something which immediately forced Indian smartphone manufacturers to take notice of and deliver through their devices as well. Really, Motorola has left no room for complaints when it comes to software. An almost stock KitKat offering, it grabs a few useful Motorola utilities as well, like Alert, Assist and Migrate. What’s important is that despite receiving the Android 4.4.3 update, it is still in line to get the next version of Google’s mobile OS. 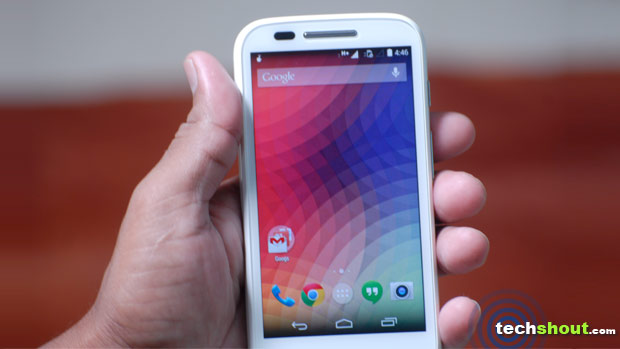 The third and most important selling point of the Moto E is its price. There’s no arguing that Motorola has triumphed in this department like few companies ever have. Offering such a premium experience in terms of design, software and performance at the sum of just Rs 6,999 is a deed that deserves plaudits.

Sized at 4.3 inches diagonally, the LCD panel on the E produces rich and vibrant colors but suffers from reduced outdoor visibility and slightly bad viewing angles. Its resolution of 960 × 540 pixels (256ppi) is still marginally more than what smartphones priced higher than it are offering. If you decide to buy this phone, be sure to kiss decent photography goodbye. That’s because it has a camera of which it should be ashamed.

Its 5MP sensor (no flash) might be respectable at this price, but what it lacks is an autofocus lens. With its fixed focus unit, the device clicks bland and extremely soft images that are good for nothing if not captured in brightly lit conditions. In the latter scenario too it just about manages to produce respectable quality in its photographs. Videos suffer the same fate and they’re moreover locked at 480p. One more thing here; there’s no front camera on this smartphone. 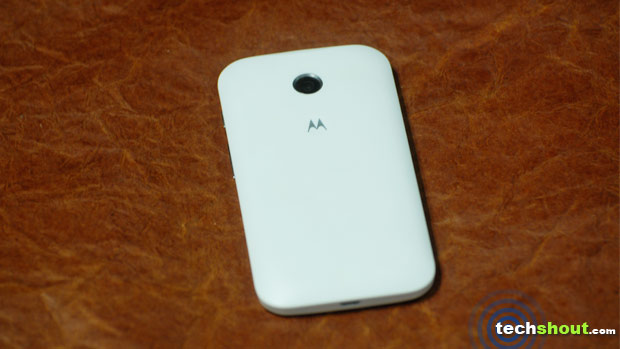 What it lacks in its camera – finesse, efficiency and quality – it more than makes up for in its performance. In our few weeks’ of analysis, this phone served us bountifully when it came to light and heavy gaming, browsing, app usage and more. Take our word for it; we haven’t seen a faster phone than this at such a low price range.

The battery life on the Moto E is satisfactory. We aren’t singing praises about it, but we aren’t slamming it either. For keeping it going for 24 hours you’ll need to sacrifice some gaming if you’re into it; otherwise you will definitely be able to keep it going for a day on moderate usage consisting of browsing, phone calls and messages.

Here’s a neat look at the main specs of the Moto E:

The fact that it’s a dual SIM device adds a lot of value in a market like India which demands this attribute with all its strength. Moreover, unlike the Moto G and the Moto X before it, this handset benefits from a microSD card slot over its 4GB of stock storage. It’s an extremely good looking piece of hardware on the outside. It’s well sized and although bulky, fits neatly in our palms. 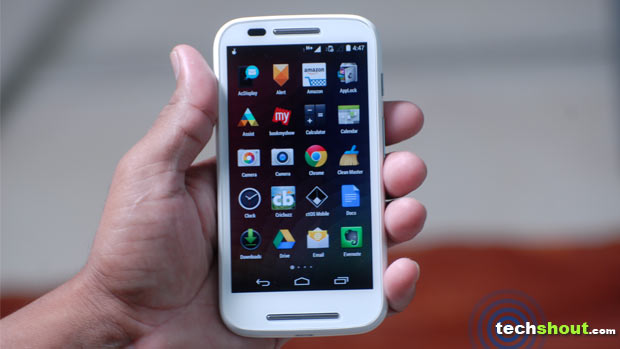 Do not be put off by the outdated nature of this phone’s dual core processor. The Moto E delivers in droves in terms of performance. There are absolutely no complaints with its software and display either. But if you’re looking for a good camera on your smartphone, you should forget about this device. If you’re not; it has got everything worth sacrificing a good camera for and that too, at a drool-worthy price of Rs 6,999.