Motorola’s popular Moto E smartphone is finally being treated to a price cut in India. The handset which originally went up for grabs at Rs 6900 is now available for Rs 1000 less, that’s Rs 5999 and it can be purchased at the new rate through Flipkart which still holds exclusivity over the phone. This makes its cheaper compared to some Google Android One handsets.

If the reduction in the retail tag isn’t enough to get you to purchase the Motorola Moto E, the handset is soon to receive an update to Android Lollipop. The company has already sent out invites for a soak test where limited users part of the Feedback Network program will be able to take the upcoming OS for a spin before it’s rolled out to everyone. 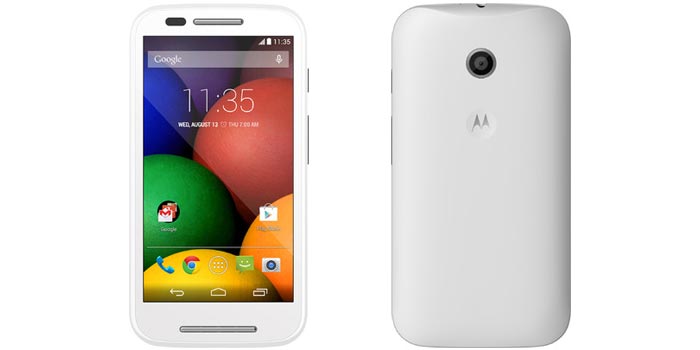 So if everything goes well, it’ll take not more than a couple of weeks for the update to arrive. One a side note, Google’s Android One devices will also be getting Lollipop, but version 5.1. The Motorola smartphone offers a gorgeous design with some pretty good hardware. The display is 4.3 inches with qHD 960 x 540 pixel resolution and a 1.2GHz dual core Snapdragon 200 processor does the heavy lifting.

Additionally, the Moto E comes with 1GB of RAM and 4GB of internal storage. There’s a microSD card slot as well, for adding the much needed hoarding space. And while the rear packs a 5MP camera, there’s no front-facing shooter on this handset.

Head over to Flipkart to purchase the Motorola Moto E at the new retail tag.