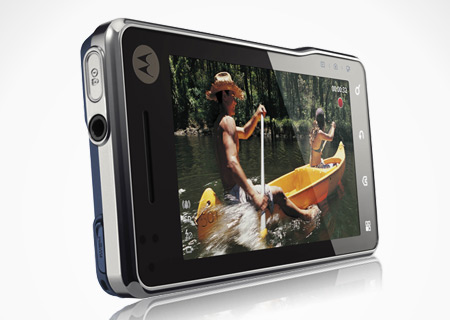 Manufacturers deem at reaching a milestone, so Motorola decided to bestow one of its high-end devices with the name itself. Last year we saw the original Milestone enter the market scene and now its successor walks into our review labs with pride entitled Milestone XT720. This year around Motorola’s creative wits splashed out innovative handsets which were highly distinguishable from one another. The device also comes with different attributes compared to the original device. It does not tag along all the features infused by its predecessor and forms an individual space for itself. However, to know if Motorola Milestone XT720 has managed to mark a milestone, we have inked down a complete analysis of the smartphone for our readers in this comprehensive review.

As the XT720 knocked our doors, it came packaged in a neat box that slides out a box shaped compartment holding the smartphone and other components in the bundle. The inner box is bright and colorful contrasting the plain Jane look of the outer one. As you pull open the tray, there’s enough room below for the charger, HDMI cable, USB cable, earphones, manual and warranty booklet.

As aforesaid, the Motorola Milestone XT720 isn’t a mere successor with a couple of changes here and there. It is a complete revamped version over the previous one and has bid good-bye to the physical QWERTY keypad alongside adds in an 8 megapixel camera with Xenon flash. The missing physical keypad has certainly taken some weight off the device as well. Thus, it is much thinner than the previous one.

The smartphone feels larger in hand and won’t snuggly fit into your palm or jeans pockets. Well, that isn’t something we are expecting either. The 3.7-inch screen housed on its front side leaves less room for a row of four touch sensitive buttons with haptic feedback seated below it like Menu, Home, Back and Search. The lower right side has a slight bump, taking off the rectangular shape from the device. The portion with the slight bump accommodates LEDs indicating the media gallery and camera/camcorder notifications. The right edge of the phone lets one adjust the volume with the integrated volume controls and just below it lies the camera activation and capture button followed by a media gallery launcher. The 3.5mm jack, HDMI port and main power/hold button run along the top edge of the smartphone. The back of the phone has been embedded with the Xenon flash, speakers and 8MP camera while the left side affixes just the mini USB port.

The front look of the Motorola Milestone XT720 goes all metallic gray while the back side adorns a soft textured material in midnight blue finish. The back flap however didn’t seem rugged and can be tempered with. As we slid out the backflap, the SIM and microSD card slots can be accessed just above the battery.

The 3.7-inch capacitive screen looks bright and sharp with 480 x 854 pixels resolution. Compared to other Android devices, the screen quality has been heightened. Moreover, the screen flashes back a mirror-like look alongside can also be called a finger-print magnet. It was decently viewable outdoors too. However, it didn’t manage to please our eyes under extremely bright sunlight.

The Motorola Milestone XT720 unit we received runs on Eclair (Android 2.1) and the interface looked vivid and crisp. It does not incorporate Motoblur so Motoblur fans may miss some widgets. The four-page homescreen can be populated with shortcuts and Android widgets. On the lower side of the screen is the call button, a pull up menu and shortcut to messages while the upper side features a pull down notifications window. Using the interface is simple but it didn’t always come across smooth. The feature-set is abundant while Android could further help expand it. One would see the built-in Motonav, Google Mail, YouTube, Quick Office, Audio Effects, Browser and more to relish on. We also lay our hands on Quickoffice which seemed an appreciable addition. 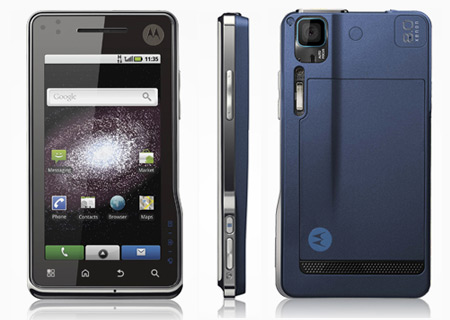 The phone bundles up attributes such as Wi-Fi, Bluetooth 2.1 and GPS. Web browsing was a good experience completely supported by the screen size and performance. We could easily connect to Wi-Fi, it also let us use the pinch to zoom function that worked fine for us. The screen is bright and displays sharp images and content, so web browsing was definitely a good experience.

We managed to effortlessly set up a Google account as well as browse websites. The large screen and zoom function further worked in tandem to deliver an enhanced experience. The embedded music player is yet another notable feature that allured us by emitting clear and loud tunes. Listening to rhythmic beats using the provided earphones enabled a decent audio experience.

The Motorola Milestone XT720 supports the Moto Phone Portal, putting a tail end to the need for PC sync or additional software as it can be accessed through a web browser connecting via Wi-Fi. The Moto Phone Portal let us manage the data on the phone effortlessly. We could also connect the phone to a PC and access Moto Phone Portal that displayed the connectivity and battery life. Moreover, the portal keeps one updated of the memory space both internal and external.

The Motorola Milestone XT720 phone is armed with ARM Cortex A8 720MHz CPU, PowerVR SGX graphics accelerator and 256MB of RAM. This combination didnt completely deliver a power punch as we did see the phone lag several times. It equips a standard 3.5mm jack so we tried listening to music with other headphones and we must say it was a pleasing experience. The internal storage is 150MB while it bundles an 8GB card to resolves all your worries. The Bluetooth connectivity and transfers were quick and good. However, the Bluetooth transfer flexibility is limited as most music and some video files can be received via Bluetooth but does not come with the ‘send’ option.

One of the highlights of the smartphone is its 8 megapixel camera and Xenon. The Gallery is quite simple to use while photos can be accessed easily with pinch to zoom and swipe functions. The camera flashes the Menu and slideshow options. The Menu further takes one to Share, Delete and More options. So we could instantly share images through Facebook and Picasa. Images can also be sent quickly via Mail using Bluetooth and Google mail. Whereas the More option let us rotate the image, crop or resize it and even set it as a contact icon or wallpaper.

While viewing, we could arrange images in grid or clustered form. Well, it’s not just about the 8MP camera, the company has also clubs it with some interesting features that are found in digital cameras these days. To start with, you can choose from seven scene modes including Sports, Auto and Night. Adjusting the brightness is made possible with the touch of a finger. The capture mode includes Camera, Camcorder, Auto timer, Panaromic, Self portrait, and Multi-shot. The camera settings let us choose the ISO settings, picture resolution, Panaromic resolution and video resolution. It features Geotagging, Face Detection and Image Stabilization abilities as well. However, the camera button didn’t respond effectively at several instances. The images are fairly good. However, we had expected better images with such an impressive sensor inclusion.

The HD video quality didn’t manage to impress us. However, we could take some decent videos at 720 x 480 pixels at 24fps. The noise levels aren’t taken care of which turned out to be one more reason for the inefficient performance in spite of the powerful camera feature-set.

The XT720 also supports 720p output with the integrated microHDMI port and bundled HDMI cable. We downloaded a couple of games from the Android Market that use the multi-touch ability of the device, giving us a fairly decent experience. We also got our hands on Live Wallpapers which rejuvenated the screen instantly. The battery life of the device with average usage appeared to be decent.

The sleek phone has been designed with good looks.

The inclusion of 8 megapixel camera and HD video recording gives this Milestone a pat on the back.

The device turned out to be sluggish at times. The camera also exhibits lags.

Though the company infused a high-resolution sensor, it failed to give justice to the images.

The hardware set fails to deliver a power-packed performance.

Motorola brings in the Milestone XT720 with refreshed features evidently distinguishable from its predecessor. It packs in numerous attributes and could offer an engaging experience to users. The feature-set comes across impressive but it fails to deliver a complete power punch performance that one may have expected. However, it is good enough to be pocketed and manages to climb the rating scale of 10 up to 9. Well, to clutch this device one will have to shell out a hefty sum of around Rs. 34,000.