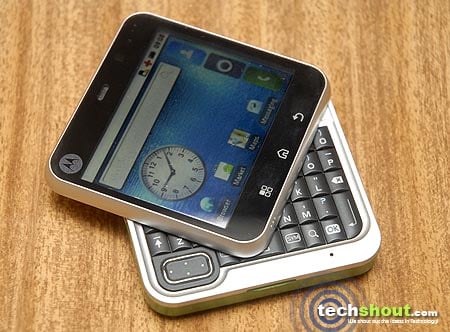 Admit it, social networks form the core of our existence today and we are slowly but surely transforming into inherently public beings. Are we taking it too far? Not just yet, we think. At least phone makers’ continued inclinations towards handsets that can commit themselves to our social whims and fancies suggest so. Given Android’s openness and the sheer large number of manufacturers porting the platform to their devices, the party for social seekers won’t stop anytime soon. Motorola’s earnest attempts at being offbeat in such a scenario were highly appreciated when it released the eye-catching Flipout phone last June. It’s taken the company just under a year to bring this phone to mobile enthusiasts’ in India and we’ve wasted no time in acquiring the diminutive soul for a review.

Our first glance of the handset had us finding an uncanny resemblance to Nokia’s Twist phone which appeared to have paved the path for square mobile phones back then. In comparison, the Motorola Flipout seems slightly smaller in size. Of course among Nokia’s present smartphones, the X5 that we reviewed recently looks awfully similar too. A blend of form and functionality however would suggest Sony Ericsson’s Xperia X10 Mini Pro to be an apt competitor to the Flipout. With Motorola calling the Flipout a ‘pocket-sized social smartphone’, we have to say the design in comparison to other handsets in the ultra-mini form factor wins hands down. The phone is cute, attractive and almost certainly a head turner. It’s a mere 67 x 67 x 17 mm in dimensions and tips the weighing scale at a 120g.

The unit we received for review was a complete package – earphones, charger cum USB cable and user guide were all in. The Flipout is bundled with alternative back covers too and we got a choice of green, red and white hoods other than the dapper black suit our unit was dressed in. We clipped on the green shroud which sat neatly on the phone’s rear, almost giving it a personality overhaul by cladding most of its chassis. Ignoring our humane side, we were compelled to put our random pushing and shoving skills to test in trying to get the back cover off though. The very inclusion of these replaceable wrappers says a lot about Motorola’s unpretentious elbow grease in appealing wider audiences besides the stamped social communicators. 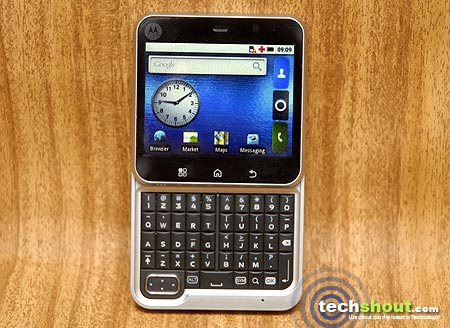 Typically Android if we can call it so, the power button sitting along the top rim is rigid and the phone took way too much time to actually start up. The 3.5mm headset port also features on this edge. The facade is almost totally occupied by the 2.8” TFT touchscreen with the volume rocker and microUSB port on the left and right borders with the screen swiveled out. A rather sturdy build quality is reflected by the slider mechanism which only requires some getting used to and nothing more. It clearly essays effectiveness mainly for right handed users with the flip out execution appearing rather intimidating otherwise. Using both hands seemed to be the only way out. While going square or not for smartphones is a matter of personal opinion, we for one grew to appreciate this virtue of the phone. Motorola does manage to balance out the weight of the device well too; it’s quite evident how the bottom is slightly heavier than the top. The lower bezel of the screen features three capacitive touch buttons for Menu, Home and Back functions.

Sliding out the screen revealed an attention-grabbing 5-row keypad complete with a four way D-pad in the bottom left corner. The keys are distinctly raised and you can actually feel the touch of the buttons as you type. Motorola has left the habitual gloss we seen on a range of QWERTY-keypad enabled smartphones, particularly from Nokia and Blackberry. Making for a firmer grip as you type, you’re can rest assured of faster typing speeds too. The small keypad may feel a bit tiresome to button down long documents but it appears flawless for emails and messages. At least it’s better than the onscreen keypad which is really crunched for space. The handset offered a decent call quality even as its tailoring seemed to be rather impractical for it. Every time we held the phone too close to our face, we ended up hitting the End Call button. The phone has to be whirled out to make and receive calls. 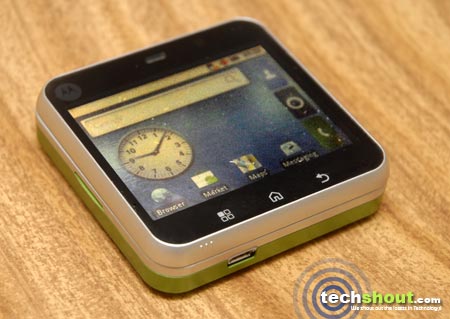 It’s Android 2.1 that calls the shots on this tiny tot. Coupled with the 600MHz processor, the handset is rather slow on the performance graph. Motorola has added its own tweaks to the onboard interface which is clearly distinguishable on the landscape orientation. It does put aside the common notion of smartphones in this petite form factor probably not being able to deliver. The company fairs well in trying to accommodate virtually everything Android 2.1 can cough up in a ‘Lilliputian’ profile. And the touch is very subtle which makes it all the more amiable. Take for instance the right of the screen featuring contact, menu and dialer shortcuts. Of course, it doesn’t make up for the slouchy gig the handset proffers but it is appreciable. Android’s signature pull-down notifications tab stays put in this handset too and the main screen is customizable with up to seven homescreens featuring various widgets and shortcuts.

Another downer with most Android phones is their rather laggard performance with a Live Wallpaper set. The Motorola Flipout found no reason to be different on this front. Interestingly, this also brought to light the handset’s poor resolution screen at 320 x 240 pixels. As curiosity took over, we inspected the image and video quality of the device. Surprisingly, it wasn’t as much of a bummer as we were expecting it to be. On a lighter note, the integrated Connected Music Player with Radio put a smile on our face. The applications were efficient and included many options to up the audio experience. The accompanying earphones Motorola’s supplied with this unit are worth a mention too. The company doesn’t lack one bit in the melody department. Despite the loudspeaker fitted at the back, the clear unfazed audio it managed to deliver impressed us enough. 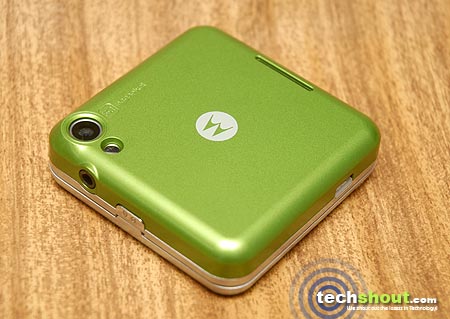 Our internet experience on this phone was on the fence of being good and lousy. While there was no way we could get the native YouTube application to bugger up, checking emails and accessing Facebook complied with our preferences. The Moto Phone portal worked pretty fine too and we could seamlessly connect the phone to our PC. We chose a Wi-Fi connection over the USB one. The handset’s posterior has been implanted with a 3.1MP camera and the Motorola insignia is also here. This is one quarter that had us irked for most parts. Still images appeared a little too pixilated while the image gallery literally left us with a sore eye. The 3D effect for viewing images stutters and is definitely not the smoothest ways to see what you’ve captured. The camera was slightly better with videos and recorded content between 26-30 fps.

Google’s obviously very visible in a host of other options the phone includes and everything from Google Maps to Gmail worked aptly. The Android Market is also thrown open for download of applications and games. We reached out to our current favorite Angry Birds Rio. The Motorola Flipout phone interestingly displayed great touch and responsiveness in the initial usage period of the game only to get a little tardy consequently. The smartphone’s battery life finished even before we could actually get started. Keeping Wi-Fi on is like a kiss of death for the handset and it will need you to juice it up once or twice in the day depending on how fervently you’ve been using it. 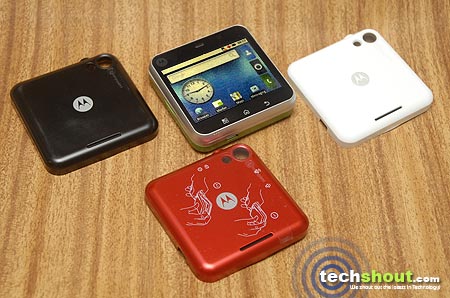 The phone’s design certainly demands more than a second look.

The Motorola Flipout is pretty efficient with multitasking, handling both music and messaging well.

The anemic battery life and display quality will have you complaining.

It took us a bit to get used to the interesting flip out design of this phone. We found ourselves trying to slide out the screen on more occasions than one. But we did eventually grow fond of the cutesy shape. And you can’t really brush off Motorola’s genuine drill in trying to wrap up everything usable in the attractive undersized profile this phone bears. While multimedia enthusiasts could find other options more enticing, text messaging and social networking lovers can rest assured of the phone’s usefulness to their specific needs. We mark the Motorola Flipout at 8.5 out of 10. The phone cost’s a slightly hefty Rs. 16,990.