The Moto G is not the only device that Motorola has in the pipeline; a certain Falcon XT1032 has shown up on the web and some of its specifications have been found on the GFXBenchmark database. The Google-owned company’s next contender is slated to make the most of the Android KitKat platform, if these results are to be believed.

According to GSMinsider, it is a mid-range phone and will come with a fingerprint sensor similar to those found on the iPhone 5S and the HTC One Max. However, this is definitely not the first Motorola device to employ the biometric sensor, the Motorola Atrix 4G made the most of this technology about a couple of years ago. 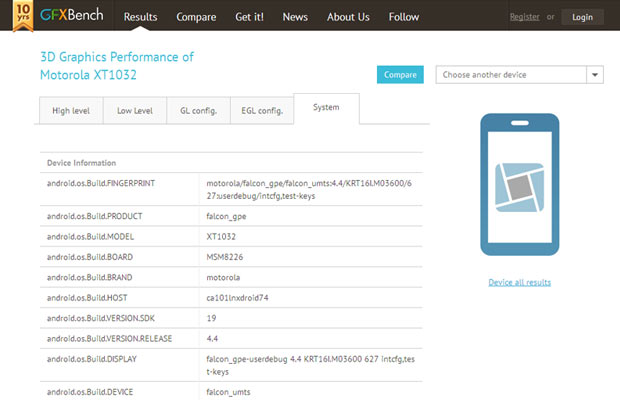 Coming to the specifications, the benchmark result clearly mentions that the phone runs on the Android KitKat 4.4 OS and manages to render 1196 x 720p resolution. And as far as its internal working is concerned, the device should support multiple applications at the same time as a Qualcomm Snapdragon S4 MSM8226 processor hides under the hood. The chip can clock in a maximum speed of 1.2GHz and takes assistance from an Adreno 305 GPU.

Apparently, this chipset is designed for developing markets and supports dual SIM functionality. It also makes a gadget compatible with China-specific networks such as TD-SCDMA, CDMA 1xAdv and HSPA+ which leads us to believe that the phone could be arriving in the said country.

Whether the Motorola Falcon XT1032 will be released in the US and Europe or not, isn’t confirmed, but we are expecting more information about the phone to pop up on the internet soon.