It looks like Verizon may be gearing up to welcome a certain Motorola Droid Ultra XT1080 smartphone soon. A picture of the device dressed in white has popped up online and it seems to be that of a new handset. The reworked Motorola logo is visible on the upper left bezel of the handset for one.

The source of the leak is someone going by the username xavierk75, on the XDA Developers forum. There’s a picture of the device along with a line referring to it as the Motorola Droid Ultra XT1080. And that’s about it. Nothing on the specifications as yet. But the moniker spells out the US carrier that the smartphone will be headed to.

By all means, the picture is enough to convince us about the sleekness of the device. We’re starting to wonder if the invitation Leo Laporte received was about the launch of the Motorola Droid Ultra XT1080 as opposed to that of the Moto X. The Moto X, you know, the Google based phone everyone’s talking about mostly because people thought the mobile manufacturer went kaput after Mountain View bought it. Well, it’s back in the market and how.

As for the Motorola Droid Ultra XT1080 photograph, there’s one particularly interesting thing about it. Lined along the bottom of the touchscreen are 3 capacitive buttons, something the company hasn’t done for quite a while. There are speculations that Google will have a little less to do with the Android experience on this one as compared to the Moto X. The last mentioned did break cover not too long ago and the pictures depicted the stock Android package on it. 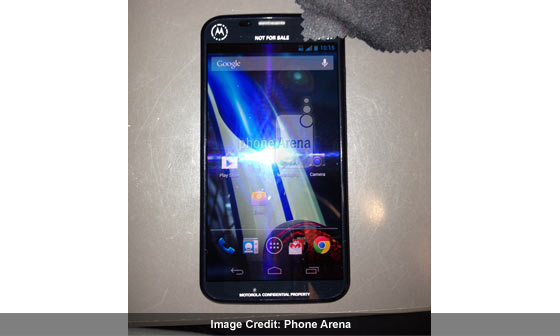 The gleaming device was pictured in a shade of black and sporting onscreen buttons instead of capacitive ones. It showeds off the company logo in the upper left corner of the front panel too. As far as specifications go, a 10MP rear camera, 2MP secondary sensor, a 4.7-inch display, 2GB RAM and a 1.7GHz Snapdragon processor are being whispered about.

Since we’re so close to July 11, we have a good feeling about the Droid Ultra XT1080 being revealed before the weekend’s up. But we wouldn’t bet our favorite tie on that.