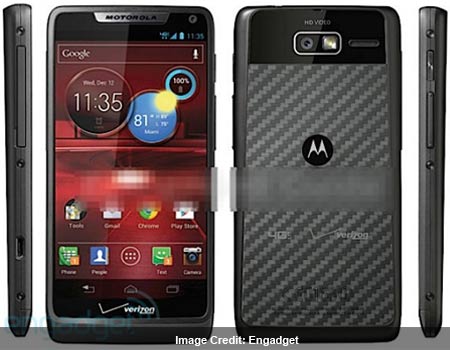 Talking about more leaks, it’s the Motorola Droid Razr M 4G LTE Verizon which has sneaked out for some unofficial airtime now. Well, it certainly looks like customers are going to be spoiled for choice when it comes to smartphone picks in September and we’re not complaining at all.

According to the news, the Motorola XT907 which has been popping into view now and again is the very same smartphone we’re talking about here. It’s only now that the entire specs sheet has been spread out for our consideration. Starting with the front panel, a 4.3-inch qHD 960 x 540 Super AMOLED Advanced touchscreen stares out of it. Additionally, a 3MP camera is perched somewhere on the top part of the bezel.

A glance at the rear side should reveal a flash, and an 8MP camera that can shoot 720p videos. On the memory angle, the handset is expected to lean on 1GB RAM and offer 8GB onboard space that is expandable up to 32GB. It works on Android Ice Cream Sandwich and a dual core 1.5GHz Snapdragon S4 MSM8960 chip. With this Droid in tow, users should be able to sail smoothly on 4G LTE, CDMA, GSM/EDGE, UMTS/HSPA+ and global GSM networks. It’s also got the whole Corning Gorilla Glass 2 and Kevlar thing going.

There’s nothing to chew over in terms of the Motorola Droid Razr M 4G LTE Verizon price and release date information. But Engadget is quite certain there’s some hands-on time to be expected at a September 5 event that the manufacturer will be pulling together.