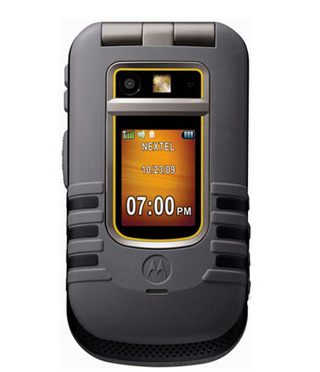 Ruggedness and reliability form a few factors which users look for in a phone. Motorola has put to fore one such device which is robust and also brings in push-to-talk services of Nextel Direct Connect. This ultra-durable device is made available through Sprint.

“Motorola Brute combined with the exclusive Public Safety applications only available on Nextel phones from Sprint allows public safety personnel to communicate, even if they are out of network range, an irreplaceable communication tool in times of emergency,” said Fared Adib, vice president – Product Development, Sprint. “Motorola Brute is a great device for anyone who works in extreme conditions.”

This robust clamshell is apt for those working in extreme conditions and possesses a quality feature set as well. Some attributes of the device are a 2-megapixel camera with flash, large internal and external display, GPS, large battery for extended talk time, music features and stereo Bluetooth.

“Nextel Direct Connect from Sprint is an invaluable tool for public safety,” said Fire Chief Charles Werner, Charlottesville (Va.), Fire Department. “During an emergency, we depend on rugged devices, like Motorola Brute, that can withstand extreme conditions, and offer instant communications; this combination is the cornerstone of effectively managing a crisis. Individuals who work in various harsh environments, such as construction and manufacturing, will find the durability of the device to be critical as well.”

The device lets users switch to an interconnect call from an active push-to-talk call just with the touch of a button. The Motorola Brute is made available with Nextel Connect calling plans through the various Sprint sales channels such as Sprint retail stores, Business Direct Sales, Telesales and Sprint’s website. The device is priced at $119.99.