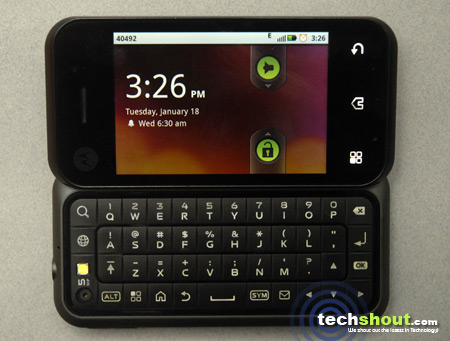 Motorola is one of the few mobile handset manufacturing companies that wield cutting-edge technologies and new multimedia platforms for everyday social interactions in a creative way. The company’s first Android smartphone entitled Cliq was a sleek styled device, save for the fact that it did not feature a breakthrough design. Next inline was the steadfast Droid which slid out a range of great new features and presented them neatly in a meaty package of wholesome goodness. While most of the Android OS supporting devices greatly suffer from identity issues nowadays, Motorola’s new offering, the Backflip, whole-heartedly retains an individualistic approach. For our increasingly curious readers, we have elaborated further down on just how much smart the phone is under its hood as it is on the outside with this review. Especially since conventional wisdom would profess, not everything that shines is gold, let alone diamond for that matter.

A fleeting look of Motorola Backflip makes it appear to be just another smartphone on the market with a glossy black finish embodying an in-call speaker outlet on the top along with three typical menu, home and back buttons resting tidily at the bottom. However, the physical QWERTY keyboard looks out from back of the phone accompanied by a 5-megapixel autofocus camera and LED flash packed neatly on the left hand corner. And as you might have already guessed, the Backflip derives its name from the mechanism with which its keyboard becomes accessible. This is first one of the unique features that make the phone stand apart from the rest available in the swarming Android smartphone market.

The keyboard flips a whole 180 degrees spin halfway through towards resting upside down on phone’s display, on the contrary to regular clam-shell styled foldable designs. This one-of-a-kind QWERTY keyboard of the Backflip is crafted with an almost finger-print resistant matte-finish and appears to be a one-piece integration, thus leaving less or no room for dust or spills of any kind to pass through. The key-tops are well enough sized for typing ease but might leave hardcore texting addicts unsatisfied.

The Motorola Backflip phone surfaces a 3.1 inch (79 mm) HVGA capacitive LCD display, which although not the best in class, makes up for a really crisp window to the device. Naturally of course, a brighter window means a better view of what lies on the other side. And so is the window that we are talking about. The handset’s display is as vibrant as it is required for a near perfect browsing, game playing and video watching experience. The landscape that expanses much of the horizon on the other side, i.e. user interface, is emblematically Android and can be customized with numerous unique UI modifications available in the market just about seamlessly. 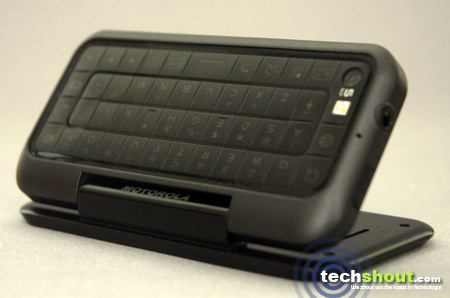 Unsurprisingly enough, the Motorola Backflip also features an accelerometer. In the wake of a price tag that is intended to fit into the budget bracket, the phone has a rather amazing user interface orienting feature. The automatic switching of the display into landscape and portrait views was virtually instantaneous. In case if you are habitual to interpreting text sideward or upside down, just for the sheer amount of fun it is to go for a flippant read, you can turn the accelerometer off from the settings menu.

Also if ever, should you need to wake up early in the morning and your alarm clock goes missing, the Motorola Backflip will instantly aid you with the Tabletop clock mode which activates once the keyboard is pivoted roughly up to 90 degrees. In addition, if it’s not the time but your loved ones that you value more, the Tabletop mode can display a slideshow of pictures stored on the phone, transforming your Backflip in a small-sized digital photo frame.

Single most annoying thing about any touch sensitive phone, not only this one, is just how much prone they are to finger-print impressions. Besides, considering the comparatively smaller surface area of their screens, fingers also hinder a user’s view while browsing through long menus or online pages. Well, it seems that Motorola feels empathetic to the annoyance that such skimming obstructions leave users with. The Motorola Backflip features a touch responsive navigation pad right behind the screen called Backtrack which greatly increases browsing comfort while making efficient use of the phone’s available estate. A pretty smart move as far as its placement is concerned, and thus becomes the second defining feature of the phone. 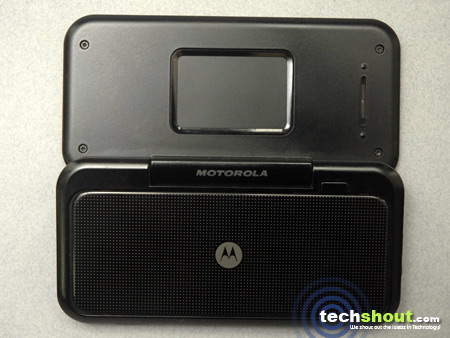 Motorola’s Backflip is driven by a 528MHz Qualcomm processing unit and capacitates storage of 256MB in Flash memory, 199MB of which remains free for usage. This means that it will run slow on occasions when your brain is geared up for a busy day with a lot of multi-tasking. However, if the SMS depository is regularly cleaned up among other things such as keeping less data on the phone’s in-built memory, the issue can be easily dealt with. A free app killer can also be downloaded from the Android market to keep a check on the processes running in the background. Pruning unnecessary applications greatly increases its performance.

Although severe multi-tasking leads to lagging issues, most of the primarily used social widgets such as Facebook, Twitter, MySpace, Photobucket, and Last.fm are integrated with the inclusion of Motoblur. It also includes applications for leading email service providers, easing users by saving them time and resources which otherwise would be occupied by requiring to open individual apps. We feel gratified of the prospect through which we had the opportunity to use Éclair 2.1 on Backflip instead of the aged Cupcake 1.5 Android OS which the phone bundles within. Disappointingly, this update is only restricted to US AT&T Backflip devices and is not available over the air. Motorola schedules to update Backflips in other regions sometime this year.

Additionally, with the upgrade to Éclair 2.1, comes the ability to install applications on your extended SD card using the downloadable Apps2SD app. Installing large sized game packages or other widgets that require huge storage space on the SD card significantly reduce clutter on the phone’s in-built memory. More room for apps means more things to do with the Backflip, resulting in increased value against your investment. So let’s just say that there are ways in which what the phone lacks can be dealt with efficiently and again, almost effortlessly.

Innovative and very functional design is an easy crowd-puller.

The hinge piecing display and keyboard together is top class and the device is very sturdy on the whole.

The overall performance never befell sluggishness, save for a few resource-intensive games.

Buying a smartphone equates proportionally to the hours of its uninterrupted usage, the Backflip has but a mere mediocre battery life.

Backflip’s camera is nothing extra-ordinary either.

Average in-built speaker quality and is one of the less brag-able features.

Motorola’s new Android operated phone aims for higher grounds with a truly innovative form factor and it’s modestly sturdy appearance. The Backflip is carved with a typical Motorola outlook and materials that, albeit lacking in over-enticing luster, build up for a rock solid device. The phone is slightly overpriced with an approximate price tag of 15,500. But its in-hand feel, unforeseen design and other functionalities that can be coupled with different physical settings, quite adequately fog the overbearing cost. Motorola’s Backflip turns out to be partially alloyed with a hefty portion of gold, and manages to score a well-earned rating of 8.5 out of 10 in our assessment.