Music enthusiasts will be happy to know that they have more options to choose from the music centric Motorola phones. Motorola has added three new rock stars to its ROKR portfolio – the ROKR EM30, ROKR EM28 and ROKR EM25. 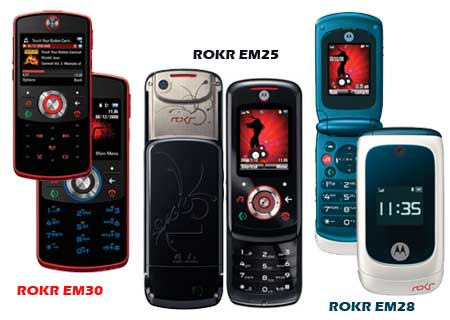 The other features of the candy bar styled ROKR EM30 phone include ‘seconds-fast’ MP3 downloads, an FM Radio powered by Radio Data System (RDS) technology that lets the listeners know the artist and the song playing on their phone. One also gets an opportunity to download music from more than 200 online music stores across the world.

The next in the rock star line is ROKR EM28 clamshell phone that lets you take control on your music with the touch sensitive keys that appear on the screen. The front of the phone displays the name of the song and artist without giving rise to the need of flipping open the clam shell.

ROKR EM28 is a Triband GSM phone with support for GPRS/EDGE and CrystalTalk technology. It comes equipped with a 1.3 mp camera with 4x digital zoom that also supports video recording and playback, 2GB microSD memory. The audio formats that it supports are 32-poly AAC, AAC+, eAAC+, AMR NB, MP3, WAV, RA6. Along with standing upto 450 minute of talk time, the phone offers 250 hours of standby time plus 11 hours of music playback.

Last but not the least is the ROKR EM25 comes with built-in FM radio with RDS, stored music library and a music dedicated key. The sleek slider phone also features the FMShare that lets you share your favourite FM station with friends by sending it to them as a text message. The ROKR EM25 phone sport SONGID technology that can identify songs.

The trio will be made available later this quarter by the American mobile giant, Motorola. While the ROKR EM 30 phone will be launched first in Taiwan and then in other markets, the other two handsets ROKR EM28 and EM25 will be available globally. The price details are yet to be released.