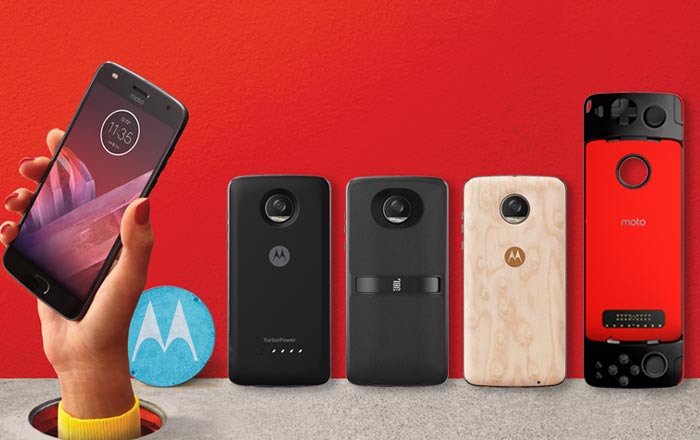 After what seemed like a never-ending flood of leaks, Motorola has finally up and launched the Moto Z2 Play. The handset is the first member of the company’s new Z2 series to make its debut and has come out alongside 4 new Moto Mods.

The Moto Z2 Play looks similar to its predecessor, but there a number of notable changes. It’s 1mm thinner and has been carved out of metal, foregoing the glass back of the original. The home button has been given a much-needed makeover for a more oval shape.

On the inside, Motorola’s furnished it with a smaller 3000mAh battery which is supposed to last for 30 hours in one go, much lower than the 50-hour backup provided by its previous variant. The brand claims that the more efficient Snapdragon 626 processor makes up for this loss.

Photography’s gotten a big boost in the Moto Z2 Play, with the firm equipping it with a 12MP primary camera that combines laser autofocus and dual autofocus pixels technology. A large f/1.7 aperture and 10x increase in the number of autofocus pixels helps let in 25% more light. A color correlated temperature (CCT) dual-LED flash unit can be found on both the front and the back.

Specifications of the Moto Z2 Play:

The Moto Z2 Play is hitting Brazil first followed by other countries later this month in 3GB/32GB and 4GB/64GB variants. The US will get it in July with a starting price tag of $499 (roughly Rs 32200).