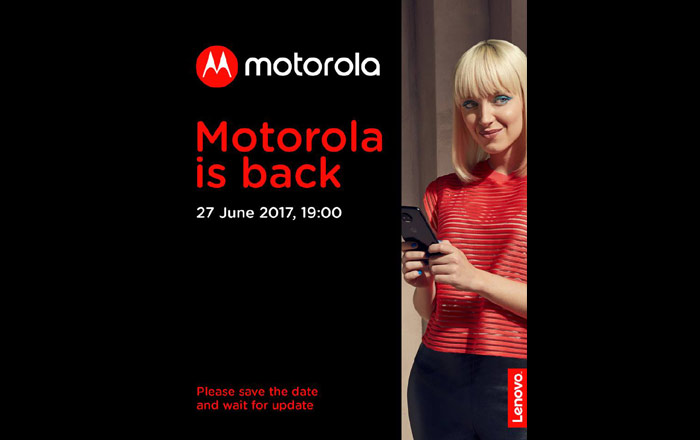 Motorola has already had a busy month so far, launching the Moto Z2 Play, Moto E4, and Moto E4 Plus all within a week of each other. Now it seems the company is going to unveil another phone on June 27.

Motorola’s begun sending out invites for an event on that date. The image bears the caption ‘Motorola is back’ and features a woman holding a mysterious Moto handset. The smartphone depicted bears a strong resemblance to the Moto Z2 and Moto Z2 Force, so it’s possible the firm is going to launch one or both phones at the occasion.

Photos of the Moto Z2 and Moto Z2 Force which have gotten leaked in the past indicate that the two will bear a dual-lens setup above a dual-LED flash unit. The device in the above image matches that description for the most part.

Another possible candidate for the June 27 launch is the Moto X4. However, that particular smartphone is expected to sport dual cameras with the dual-LED flash module placed above, not below, the lenses. Moreover, a recent leak had hinted that the handset was coming out on June 30.

To make things a bit more confusing, Motorola is hosting an event in Brazil on June 21. That particular occasion may also see the launch of the Moto Z2 or Moto Z2 Force. It could even be dedicated to the Moto G5S Plus, another dual camera offering.

In official news, Motorola has started teasing the arrival of the Moto C Plus in India. We’ll keep you updated the moment a concrete date gets announced.