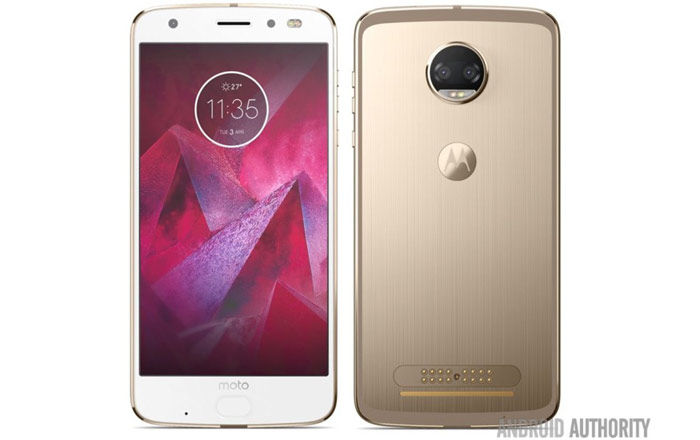 Renders of various members of the Moto Z2 lineup have been popping up over the past few weeks, with the Moto Z2 Play going first followed by the Moto Z2. It’s now the Moto Z2 Force’s turn to shine in the spotlight with a leak of its own.

The Moto Z2 Force seen above was obtained by Android Authority and comes from a reliable source familiar with Lenovo’s plans. It certainly falls in line with the glimpses of the Z2 lineup we’ve seen so far, with the front being almost identical to the others except for the moto logo getting placed above the home button instead of at the top.

The back of the Moto Z2 Force features more noticeable differences like the dual camera setup. This is a first for the series and should make for some interesting photography skills. There’s a dual-LED flash unit on both surfaces to light up selfies and non-selfies taken in dark environments.

Past leaks have indicated that the Motorola phone will be blessed with the company’s signature ShatterShield technology to prevent the handset’s display from falling apart when dropped. The phone will likely support 1GHz LTE speeds and support Moto Mods as well.

The former probably means that the Moto Z2 Force will take advantage of a Snapdragon 835 processor since it can deliver those kinds of speeds. There’s no official launch date for the smartphone yet, but it might just come out sometime this summer, possibly June 8 alongside the rest of the Z2 series.