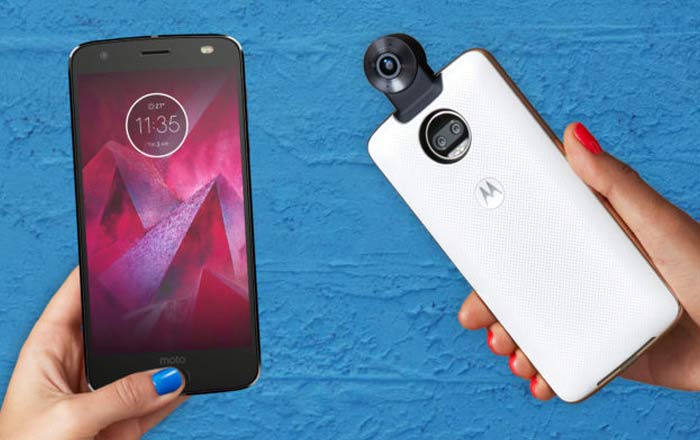 The Moto Z2 Force Edition has officially gotten launched at an event alongside a brand new Moto 360 Camera Mod. Like its predecessors, the handset boasts of ShatterShield protection to stop the screen from breaking into smithereens if dropped. It’s also been reinforced with 7000 series aluminum for added durability.

As for fresh changes, the Moto Z2 Force Edition comes with two 12MP cameras on its back, one fitted with a monochrome lens and the other color. Together, the duo is supposed to capture higher-quality photos. There are also a range of post-production effects to experiment with like selective focus and selective black + white.

Also See: Moto G5S Plus to get hold of dual cameras, bigger screen

One major difference between the original and new Motorola phone is the battery power. The older model packed a bigger 3500mAh battery, while the newer one gets by on a 2730mAh unit. Still, the company claims the latter can last all day and its 15W TurboPower charger is capable of delivering 8 hours of power within minutes.

Coming to the new Moto 360 Camera, the accessory goes for $299 (approx Rs 19330) and will hit shops globally on August 10. It snaps to the back of any Moto Z to capture 360-degree footage in 4K and 3D audio. People can also use it to shoot 150-degree ultra-wide-angle photos from the front and back.

The Moto Z2 Force Edition will hit availability in the US on August 10 via US Cellular, Verizon, AT&T, T-Mobile, and Sprint. It’s priced at $799.99 (roughly Rs 51540) and starts at $30/month on a contract basis. You can pre-order it here and get a free Insta-Share Projector Moto Mod.