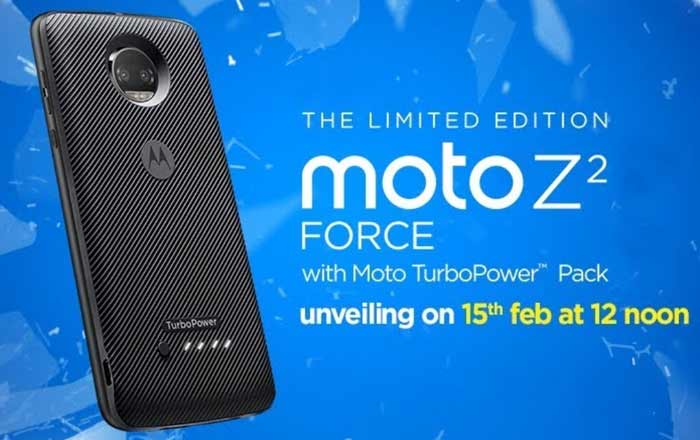 Motorola showed off its shatterproof Moto Z2 Force to the world all the way back in July last year. It’s now finally decided the time is right to unveil the handset in India, issuing invites for an event on February 15.

Based on the invite, it seems Motorola is looking to sweeten the deal by throwing in a free TurboPower Pack Mod along with the Moto Z2 Force. The accessory adds a hefty 3490mAh battery to the device’s 2730mAh cell for an impressive 6220mAh of power.

The TurboPower Pack Mod also supports fast charging, allowing users to gain 7 hours of battery life after just 15 minutes of fueling up. It’s actually already available in India since it got launched in the country in December 2017 at Rs 5999.

As for the Moto Z2 Force, Motorola hasn’t disclosed its price or availability details yet. It’s added the words ‘Limited Edition’ to the phone, so it might just arrive here in fewer quantities. It’s priced at $720 in the US which translates to roughly Rs 46240 in India.

Motorola’s hosting its February 15 launch event live on YouTube at 12 noon. Stay tuned for more on the smartphone the moment it officially arrives.