It’s been almost two months since Motorola first announced its modular Moto Z and Moto Z Force, but the manufacturer is yet to make the third member of the series official. The Moto Z Play has been running the rumor mills for quite a long time now and a new set of leaked photos offer a detailed look at what to expect from the phone.

At first glance, the Motorola Moto Z Play looks very similar to its siblings, right down to the modular pins on its back. However, the rear surface is where the handset strikes a different path, since it appears to be fashioned out of glass. To recall, the Moto Z and Moto Z Force both feature all-metal bodies.

Other than the sleek glass design, the Moto Z Play also features a cool spiral pattern to further distinguish itself from the other members of its clan. The other crop of snaps seems to be of the Chinese model of the phone. The white and gold version of the phone has been spotted online before, leading some credence to the new leak. 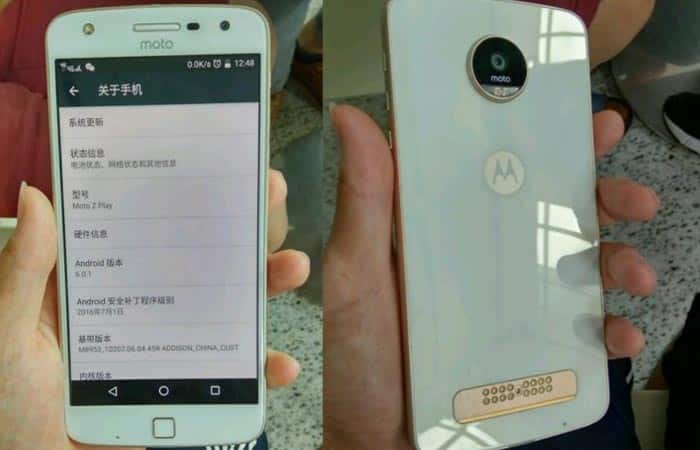 Based on the pictures, the smartphone is set to sport a physical home button which will probably do double duty as a fingerprint scanner. Previous leaks have suggested that the Motorola offering could pack specs like a 5.5-inch 1080p AMOLED screen, an octa-core Snapdragon 625 processor, an Adreno 506 GPU, and Android 6.0 Marshmallow.

The Moto Z Play may also be chugging along with the help of a 3500mAh battery. It might get blessed with a 16MP main camera furnished with laser autofocus, OIS, dual-tone LED flash, and PDAF. Motorola is reportedly planning to launch 2GB/16GB and 3GB/32GB versions of the device.