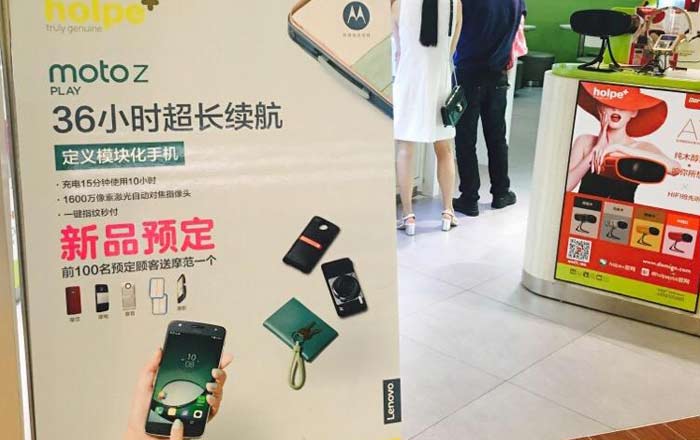 The Moto Z Play has gotten leaked yet again, this time via a GFXBench listing and a Weibo-sourced promotional poster. The handset has been the subject of numerous speculations for months now and may finally see the light of day on September 6.

Based on the image, the Moto Z Play will support the brand’s unique swappable Moto Mods just like the other phones in the series. The poster hints that the smartphone is set to carry a massive battery which is supposed to last for 36 hours in standby mode. Furthermore, the phone can apparently survive for 10 hours after just 15 minutes of charging.

The photo doesn’t specify what the capacity of the battery is. Previous reports have indicated that the Motorola offering will be powered by a 3500mAh unit. The new GFXBench listing more or less falls in line with previous leaks. According to the benchmarking site, the smartphone will house specs like a 5.5-inch screen which outputs its visuals in a full HD resolution.

The Moto Z Play could run Android 6.0.1 Marshmallow right out of the gate. With regards to its photography skills, the brand may equip it with a 16MP primary camera and a 5MP selfie shooter. In terms of memory, the handset may contain 32GB of built-in room and 3GB of RAM. Moreover, it might be powered by a 2GHz octa-core Qualcomm Snapdragon processor working in sync with an Adreno 506 GPU.

Stay tuned for more on the Moto Z Play up until its expected launch on September 6.