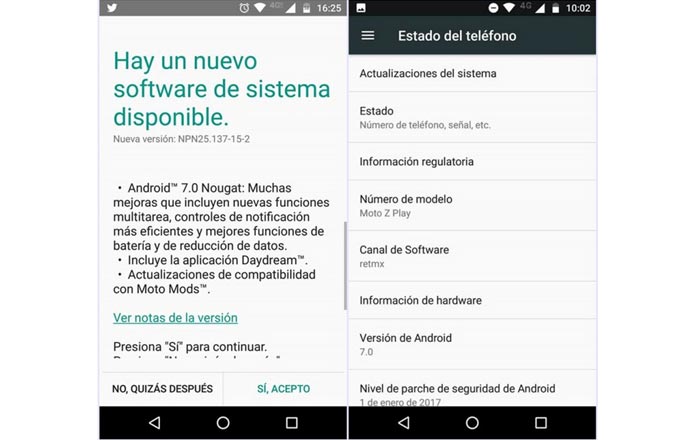 Motorola has apparently begun beaming out the upgrade to Android 7.0 Nougat for the Moto Z Play in certain markets. The release’s build number is NPN25.137-15-2 and its codename seems to be retmx.

The latter moniker is a point of confusion since it seems to be the codename for Motorola’s Mexican rollout rather than the European reteu. The Android Soul alleges that Nougat for the Moto Z Play first hit Portugal followed by Spain. This assertion is being contradicted by a few who say the screenshots posted are from Mexico, not Portugal.

In any case, Android 7.0 is definitely going to make its way to units of the Moto Z Play across the world. Motorola’s German Twitter handle recently posted that the update would hit the phone by the end of January without specifying whether this was a German-specific or EU-wide release.

Moreover, Android Police reports that the Moto Z Play is set to get upgraded via an early preview of Nougat in the Motorola Feedback Network. Participants of the latter have supposedly gotten an email informing them that the company is moving quickly on this and asks them to take an enrollment survey to join the test.

This process is likely for US-based owners of the Moto Z Play. A Motorola spokesperson previously told Android Central that the smartphone would be getting promoted to Android 7.0 for the US in March. They had also stated that the unlocked Moto Z was being updated in February; months after the Verizon variant got upgraded.

You can check if your Moto Z Play has gotten Nougat by diving into Settings, About phone, and System updates.