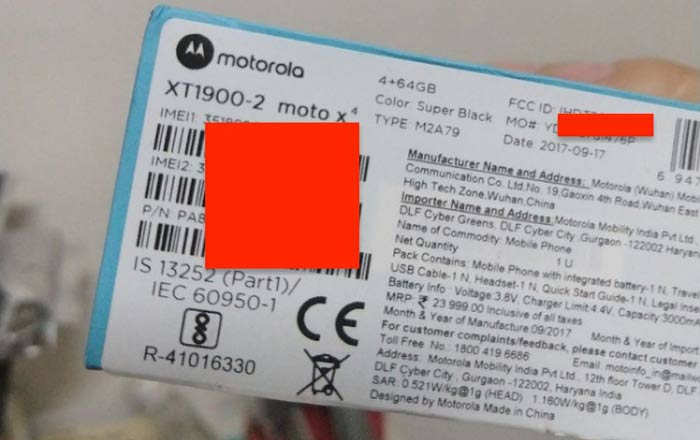 The Moto X4 is due to hit India on November 13, a couple of months after getting launched at the IFA in September this year. The two main mysteries surrounding the phone right now are its local price and Android One support.

A new image has arrived courtesy a Twitter leakster named Zhao Yu to answer both of these queries. The snapshot appears to be of the Moto X4’s retail box, revealing that the phone will set buyers back by Rs 23999. This is in line with the handset’s $399 cost in the US which translates to Rs 25930.

As for the other piece of the puzzle, the box doesn’t include any markings of the Android One brand. To recap, Motorola had launched a separate variant of the Moto X4 which was part of Google’s program in the US and supported the brand’s Project Fi network.

Some had hoped this particular Android One version would make its way to India, but the image above suggests against that. The photo also indicates that the Moto X4 will be stuffed with 4GB of RAM and 64GB of ROM. This is double the European and US editions of the smartphone, so that’s a definite plus.

Another modification for Indian audiences comes in the form of dual-SIM support. This was verified thanks to a separate screenshot of the Moto X4’s Settings page shared by the same leakster. We’ll have to wait and see on November 13 whether the information given here was accurate or not.