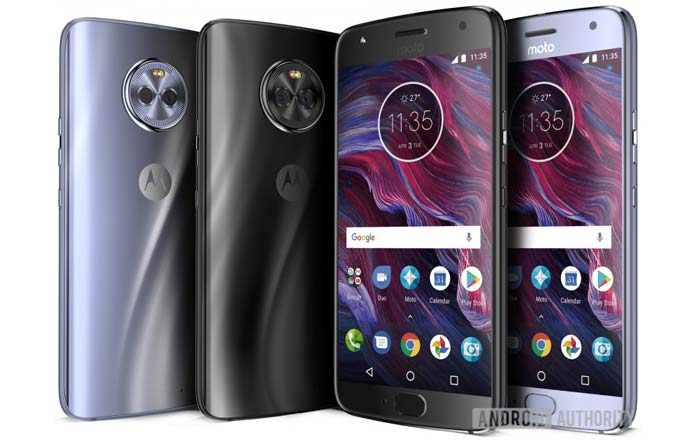 The Moto X4 recently starred in a couple of hands-on shots, and now it’s time for the phone to be the star of a brand new press render. It’s the clearest look yet at the device, showing off a thick smartphone with a shimmery glass black.

The subtle ‘X’ shape formed by the light at the center of the Moto X4’s dual cameras is a nice touch, as are the notches to give it more of a DSLR-like vibe. A 12MP lens laden with dual autofocus, a 1.4µm pixel size, and an f/2.0 aperture apparently serves as the main snapper, while an 8MP one handles ultra-wide angle shots with a 120-degree field-of-view, f/2.2 aperture, and 1.12µm pixel size.

There may also be a dual-LED flash unit and PDAF skills to accompany the module. The Moto X4 will probably be able to get up to the same tricks as the Moto Z2 Force’s twin lenses in relation to features like depth of field effects. Users will find a 16MP camera up front, furnished with an f/2.0 aperture and 1.0µm pixel size.

The selfie camera is supposedly designed for taking ultra low-light snaps and takes the help of an Adaptive Low Light mode to do so. It’ll also be able to record 1080p video at 60fps and 4K footage at 30fps. Other than its photography skills, the Motorola offering comes across as a standard mid-ranger, boasting of a Snapdragon 630 processor and 3000mAh battery.

Other rumored specs include a 5.2-inch FHD screen, IP68 dust and water resistance, and Adreno 508 GPU. Motorola is said to be planning a 3GB/32GB variant for Latin America, North America, and Europe. On the other hand, the Asia Pacific region may be getting its hands on a 4GB/64GB model.