Motorola is pulling the custom engraving feature from the clump of options Moto X users can pick from if they want to make their handset look unique. This move is said to have been made in the face of quality control problems, according to the company’s own statement. Of course, the decision is affecting just AT&T customers presently since other carriers stateside will have to wait a bit before being able to offer subscribers the choice of a personalized Moto X.

The hoopla around the Motorola phone mostly has to do with the fact that it’s customizable. When it came to the specs, you could have colored us unimpressed until we heard what other people who’ve had a chance to try the device had to say. The company has apparently done a great job with melding the hardware and software together. A quick peek at the specs – a 4.7-inch display is nailed onto the front and above this is a 2MP lens. The back panel sports a 10MP 1080p camera and a 2200mAh battery hides under it.

The whole show is powered by Android 4.2.2, 2GB of RAM and a 1.5GHz dual core Snapdragon S4 Pro processor. In terms of memory, you can pick between 16GB and 32GB. But what is this Motorola X8 Mobile Computing System the company is talking about? The whole thing refers to the software enhanced Qualcomm chip inside the smartphone, a contextual computing processor and a natural language processor. We’re assuming it’s this combination that allows the Moto X to stay ‘always on.’ Creepy.

Motorola says that there are over 2000 ways to tweak the design of the phone. You can change the color of the back, front, camera ring and buttons as well as add your own message to the rear side. It is this last mentioned custom engraving option that has been withdrawn currently. Tech writer JR Raphael’s Google+ page carries an official statement by the company which notes that the quality of the printing didn’t match up to the expected standards. 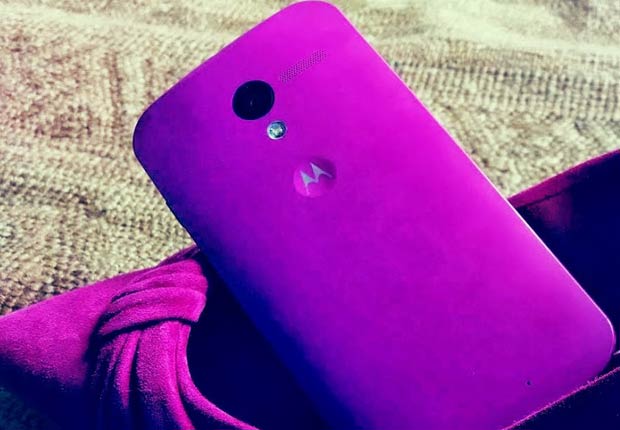 Check out the video of the Moto Maker (posted above) which shows off all the alterable features of the Moto X. And yes, the wood panels will be coming. The carrier-subsidized price of the smartphone is $199 in the US. Which would you rather have – a gold iPhone 5S or a personalized Moto X?