Motorola’s Moto X smartphone has since long been available only in 16GB and 32GB storage options, with some countries outside the US not even getting the latter one. But it seems there’s demand for another higher-storage model of the phone; on its home turf at least.

A Russian website named Mobiltelefon has snapped up an image from the Moto Maker page which shows a 64GB model of the Moto X available for purchase at $449.99. That is a $100 bump over the price of the 16GB version. Although this listing has obviously been taken down now, some digging in on the site’s source ode by Android Police pulled up more proof which you can spot in the second image down below. 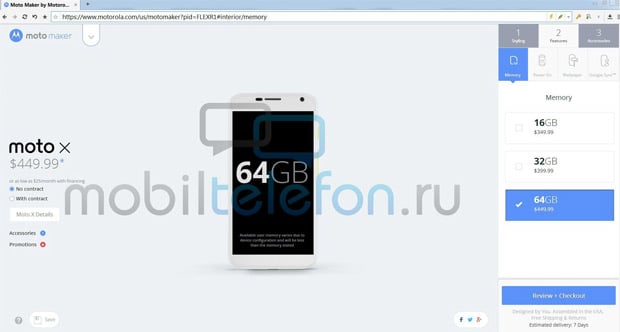 We’re not sure on when Motorola plans on making the 64GB Moto X official, especially with all eyes now peeled on the unveiling of its successor, the Moto X+1. When it is indeed made available though, you can expect to it to be offered with support for all major carriers in the US.

The X impressed us a great deal with its superb software attributes which include Touchless Control, Active Display and more. Additionally, the smartphone’s performance too is something to sing praises about thanks to its unique X8 Mobile Computing System which grabs a dual core Snapdragon processor, a quad core GPU and two separate cores aimed at efficiently facilitating its above mentioned software features.

With no microSD card slot available on the Moto X, consumers with big storage needs will be happy to see its 64GB variant. We’ll have more on it when additional details are out.

In the meantime, here’s a neat look at the specs of the Moto X: