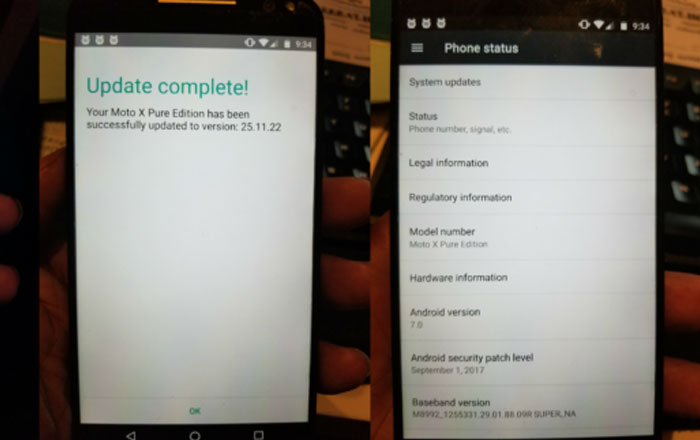 In somewhat unexpected news, Motorola has finally decided to update the Moto X Play and Moto X Pure Edition to Nougat. Both phones were launched in 2015 and have been promised the upgrade for a while, so it’ll come as a relief to owners that the upgrade is here at last.

It should be noted that the Moto X Pure Edition is known as the Moto X Style in most markets outside the US. Motorola initially announced the upgrade in April 2017 and began seeding Android 7.0 Nougat to Brazilian units in July 2017. It’s taken the company nearly 2 months to do the same in the US.

Some Moto X Pure Edition owners on Twitter have pointed out that this is the first upgrade they’ve received in over a year, including security-related ones. This is a pretty poor performance by a company that was once known for being one of the best Android OEMs when it came to updates.

It’s unlikely to be getting any other big promotions in the future given how slow this one was. Moreover, some are surprised that Motorola has updated the device to Android 7.0 and not the more recent Android 7.1.1 version.

That’s not the case with the Moto X Play, which has managed to snag Android 7.1.1 Nougat in its latest update. However, this again has begun appearing only in Brazilian units for now. Hopefully the promotion will begin appearing in other countries sooner rather than later.

You can check if you’re Moto X Play or Moto X Pure Edition/Style has gotten Nougat by heading to Settings, About, and finally Software.