Carriers have been offering the Moto X in the US at just $99 after a $50 price cut and Motorola has now extended the drop to its unlocked Developer Edition phone which comes in two variants, one GSM compatible and the other carrying Verizon-friendly radios. The new retail amount for the made-in-America smartphone is $549.99 after a $100 reduction.

The developer versions of the Moto X, however, come in standard choices and they cannot be customized. Android Police highlights that the Verizon-exclusive Droid Maxx Developer Edition which features almost the same hardware components as the device in question, is still listed at $649.99. Motorola recently revealed that the latest flagship and the new Droids will be updated to Android 4.4 KitKat, but no specific launch schedule has been provided. 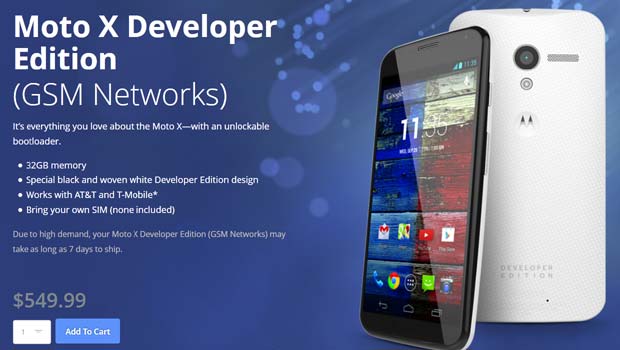 Here are the main specifications of the Moto X Developer Edition:

While the Moto X is gradually becoming cheaper, Motorola plans to launch a new smartphone which will not only be affordable, but also possess the same features as the device in question. The handset will go by the name Moto G and it will be officially unveiled on November 13. Based on rumors and leaks, the device will retail for £134.95 and it will be available globally. The specs are said to include a 4.5-inch HD display, Android 4.3, a quad core 1.2GHz processor and a 5MP primary camera.

The Developer Edition Moto X can be purchased through Motorola’s website.