Now, Developer Edition phones aren’t exactly designed for everyone. Unlocking the bootloader provides the ability to highly modify the firmware by flashing a custom kernel or a homebrewed ROM. But then again, doing so voids the warranty. This version of the Moto X has been given special treatment as it comes in a black front and woven white rear panel. The company has announced 2 models, one exclusive to Verizon and the other unlocked which is compatible with T-Mobile and AT&T. Additionally, Droid Life notes that the Kevlar-reinforced Droid Maxx has also be launched in a Developer Edition. 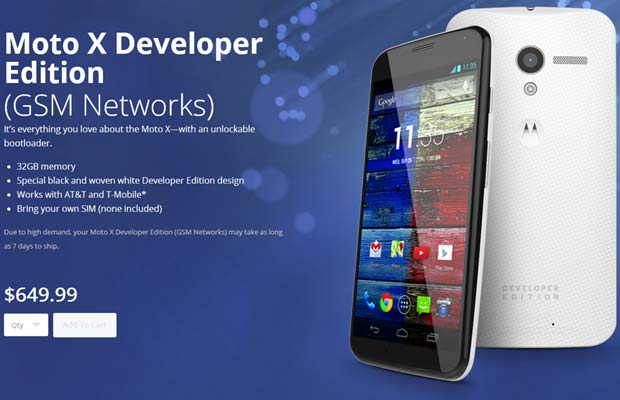 Where specifications and features are concerned, the Moto X for developers is no different from the original. It has a 4.7-inch HD AMOLED touchscreen and a 2MP 1080p camera on the front, while the rear dons a 10MP Clear Pixel snapper. The Android 4.2 platform is in the driver’s seat powered by the Motorola X8 Mobile Computing System which possesses a 1.7GHz dual core S4 Pro CPU and Adreno 320 graphics. You’ll also get 2GB of RAM, 32GB of storage and a 2200mAh battery.

The GSM and Verizon versions of the Moto X Developer Edition are priced at $649.99. The company is ‘experiencing high demand’ and both devices are not in stock at the moment.