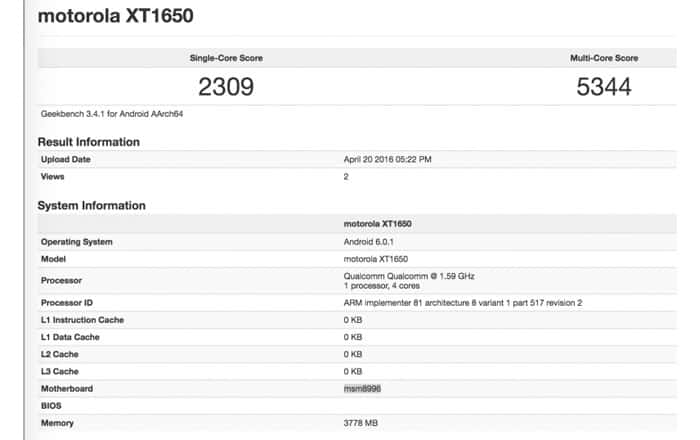 A new handset dubbed the Motorola XT1650 has been spotted on Geekbench, triggering speculation that the phone is in fact the Moto X (2016). The benchmarking website reveals quite a few interesting tidbits about the upcoming flagship.

For one, Geekbench lists the Motorola XT1650 aka Moto X (2016) as running a 1.59GHz quad-core Qualcomm MSM8996 processor, better known as the Snapdragon 820 SoC. The CPU gets things done with the help of 4GB of RAM, further strengthening the notion that this is a flagship offering with top-of-the-line specs.

Moreover, the Moto X (2016) looks like it’ll ship with Android 6.0.1 Marshmallow. However, MobiPicker suggests that there’s a chance it might just offer Android N. According to the site, the new phone could make its debut on 9th June, post the Google I/O event in May which might see the unveiling of the company’s newest OS.

Speculation so far has hinted that there may be two versions of the Motorola handset. Other than the Snapdragon one mentioned above, the other model may pack a SoC which clocks in at 2.15GHz only. The device may either contain 32GB or 64GB of internal room which will likely be expandable via a microSD card slot.

There has been a ton of speculation surrounding future Motorola handsets lately. The Moto G (4th gen) was recently leaked in a hands-on video with a fairly large display and no fingerprint scanner. The Moto G4 Plus was leaked prior to that with a fingerprint sensor, suggesting the latter handset is an enhanced version of the former.

We’ll keep you updated regarding any fresh news concerning the Moto X (2016) in the coming days.