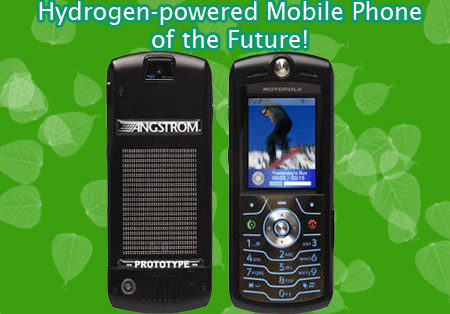 CES 2008 has showcased some amazing marvels from the tech world. Right from a bed that offers much more than a place to sleep to the world’s largest Plasma HDTV! Now, here is something that is much-needed in our world today- an innovative green product straight from the heart of this year’s Consumer Electronics Show.

Motorola showcased its Motoslvr mobile phone incorporated with Angstrom Power’s hydrogen fuel cell. This means that this prototype cell phone is powered by a methanol fuel cell. The best part is that the hydrogen-powered battery fits into just about any normal handset.

According to Angstrom, the direct methanol fuel cell is much more efficient than lithium ion batteries, which are used is almost every mobile phone of today. Another great feature of these hydrogen-powered mobile phone batteries is that it takes nothing over 10 minutes to recharge.

Showcased at CES 2008 by Motorola was its Moto SLVR L7 handset, which was powered by Angstrom’s hydrogen-powered EverOn battery.

It certainly is great that companies are thinking up such innovative concepts, ones that will benefit the environment, which is already being badly affected by a number of reasons. European activists claim that lithium batteries clog up landfill sites and also contaminate water sources.

Jerry Hallmark, a spokesman for Motorola said that despite the lack of hydrogen refueling products in the market, the need for “efficient powering solutions” was growing.

The Angstrom battery has been in its trial phase since the last six months. However, this technology could be commercially ready and fully available in 2010.