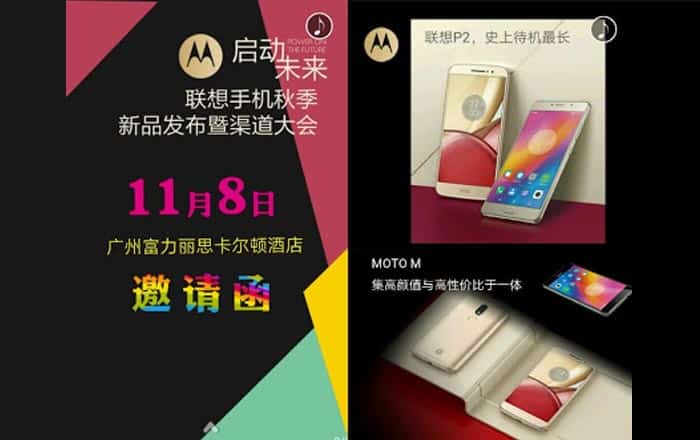 Lenovo is all set to launch the highly-anticipated Moto M and Lenovo P2 at an event in China on November 8 going by a new report. The Motorola phone has been spotted out and about the internet for quite a while now, revealing a number of its key details in the process.

An invite for the November 8 gala is apparently being circulated among the Chinese media right now. The Moto M seen in the photos appears to be in line with previous leaks. It seems to have an all-metal body with a fingerprint scanner on the back.

Previous speculation had indicated that the Moto M might carry a 5100mAh battery, but it now seems more likely this will be the P2’s strength instead. The smartphone had been unveiled by Lenovo at IFA 2016 with a November release date and EUR 249 (approx Rs 18200) price tag in mind.

Also Read: Moto M gets caught in the wild

Rumors so far suggests that Motorola is equipping it with a 5.5-inch FHD display, 3000mAh battery, Android 6.0 Marshmallow, and an octa-core 2.15GHz MediaTek Helio P10 SoC. In terms of memory, it could be stuffed with 32GB or 64GB of storage and 3GB or 4GB of RAM. As for photography, it might be blessed with a 16MP camera and 5MP selfie snapper.