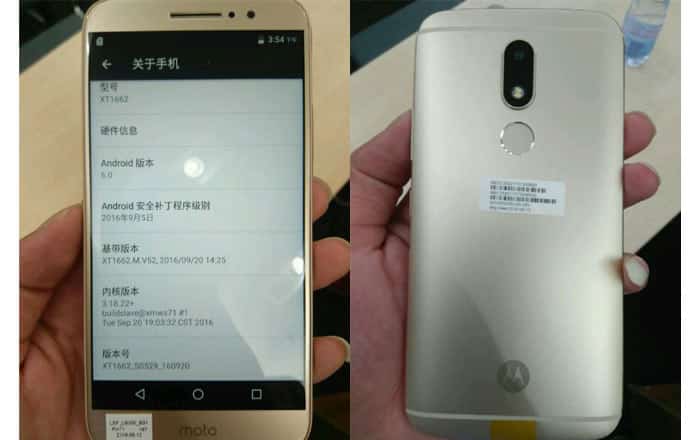 Motorola’s upcoming Moto M smartphone has been the subject of numerous leaks for the past couple of months. A new one sheds some more light on the handset which is yet to see the light of day despite being certified by TENAA all the way back in August.

The fresh set of hands-on photos is in line with previous sightings of the Moto M. The image on the left confirms that it’ll run on Android 6.0 Marshmallow and bears the model number XT1662. The one on the right leads further credence to the speculation that the handset will be the first Motorola handset to have a fingerprint scanner on its back.

The snaps also suggest that the Moto M has been carved out of metal and sports a curved back design. As per rumors so far, the forthcoming smartphone could boast of specs like a 5.5-inch FHD screen and 3000mAh battery. It might be powered by an octa-core 2.15GHz MediaTek MT6755 processor which could get things done with the aid of 3GB or 4GB of RAM.

Motorola may also stuff the smartphone with either 32GB or 64GB of in-built storage. As for its photography capabilities, the phone could be blessed with a 16MP rear camera accompanied by dual-LED flash. A 5MP front-facing snapper is also a possibility.

Earlier rumors had hinted that the Moto M could come out in November, presumably in China first since most of the leaks so far have originated from there.