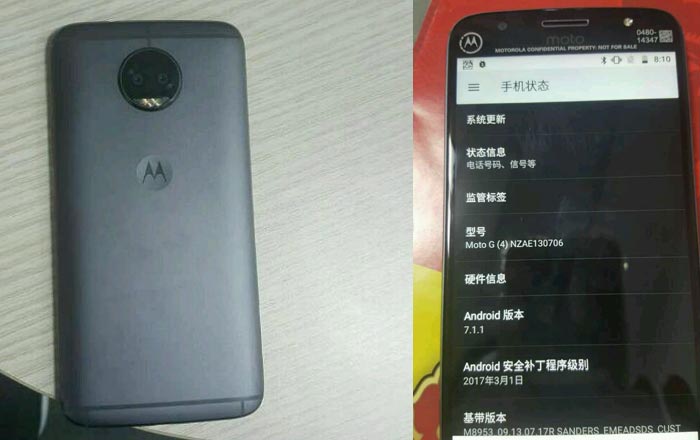 Motorola’s preparing to launch a refresh of its mid-range G5 series by launching two new phones under the moniker and adding the letter ‘S’ to its names. Numerous renders of the Moto G5S and Moto G5S Plus have cropped up over the past few months, and now hands-on images of the latter have shown up on Weibo.

The alleged real-life snaps serve to back up assertions that the Moto G5S Plus will feature a full-metal body rather than the aluminum and plastic combo of its previous variant. The photos also indicate a comeback for Motorola’s signature batwing M logo dimple below the rear cameras.

Speaking of the cameras, it seems the rumors about the Moto G5S Plus having twin snappers on its back are true after all. Both can be seen side-by-side inside the circular lens enclosure along with a dual-LED flash unit.

It’ll be interesting to see what Motorola plans to do with the dual snappers. The original Moto G5 Plus offers a high-end 12MP Dual Autofocus Pixels shooter that boasts of a large f/1.7 aperture and 4K video recording, making photography one of its main highlights. It looks like the brand is leaning more heavily on that particular aspect for its sequel.

Reports so far have hinted that the Moto G5S Plus is getting specs like a bigger 5.5-inch screen and an LED flash unit up front. Based on the leak, it looks like the device will run on Android 7.1.1 Nougat and a Snapdragon 625 processor. The second is under speculation though, since earlier rumors had asserted that it might get a Snapdragon 660 SoC.