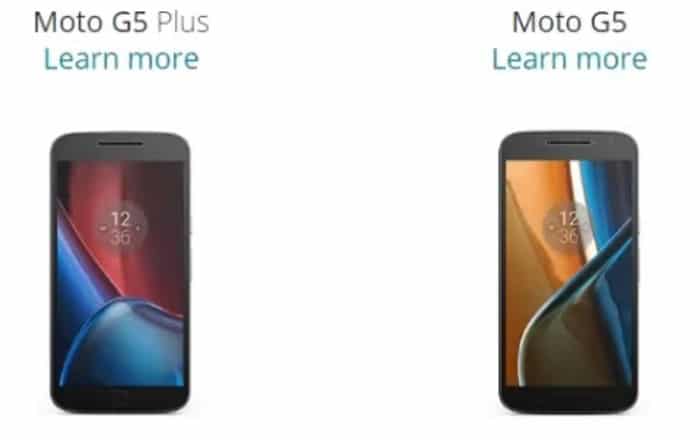 3 new Motorola handsets have gotten leaked in two separate reports which allege that the handsets in question are the Moto G5, Moto G5 Plus, and Moto X (2017). While the first two have emerged with a fairly detailed specs list, the last has very little solid information accompanying it.

Starting off with the Moto G5 and Moto G5 Plus, only the front portion of the smartphones can be seen in the images. Based on the snaps, the phones look remarkably similar to its predecessors, raising doubts about the leak’s authenticity. The report also hints that the devices will sport a common set of features except in a few key aspects.

The Moto G5 is apparently going to ship with a 13MP rear camera, a 5MP front-facing shooter, a 5.5-inch 1080p display, an octa-core processor, 16GB of internal room, turbo charging support, and a battery which can last for 24 hours. It may be sold in black and white color options.

Also See: Motorola has given up on smartwatches

As for the Moto G5 Plus, the handset bears a lot of similarities with the regular variant except for a fingerprint sensor, 16GB and 32GB storage options, and a 16MP primary snapper. Both phones might run Android 7.0 Nougat out-of-the-box, a safe assumption given the fact that the OS has already started seeding out for the G4 series.

The pair of Moto G5 smartphones are supposedly coming to light on March 8, though where this is happening hasn’t been specified. Things are a lot less certain when it comes to the Moto X (2017). The offering appears to be made out of metal and sport a Moto Z-esque design without the unique Moto Mods connector pins.