Motorola’s MWC 2017 event is only a few days away now on February 26, but that hasn’t stopped a flurry of new photos of its Moto G5 and Moto G5 Plus from getting leaked online. The former can be seen in a couple of hands-on snaps, while the latter can be viewed in its press render form.

Starting off with the Moto G5, the live photos appear to be in line with glimpses of the handset seen in the past. It seems to have an all-metal design, prominent camera module, and a physical home button likely doubling up as a fingerprint sensor.

As per Major Droid, the Moto G5 is going to measure 5.2-inch and output a 1080p resolution. Interestingly, it might come with a removable 2800mAh battery. There’s also talk of virtual buttons and Android 7.0 Nougat OS running the show.

Also See: Moto G5 to be cheaper than Moto G4

Motorola is apparently stuffing the smartphone with 32GB of ROM and 2GB of RAM. A Snapdragon 430 processor might be in charge of day-to-day operations. The publication claims that the company is using the same biometric sensor touchpad found on the OnePlus 3 for the phone. 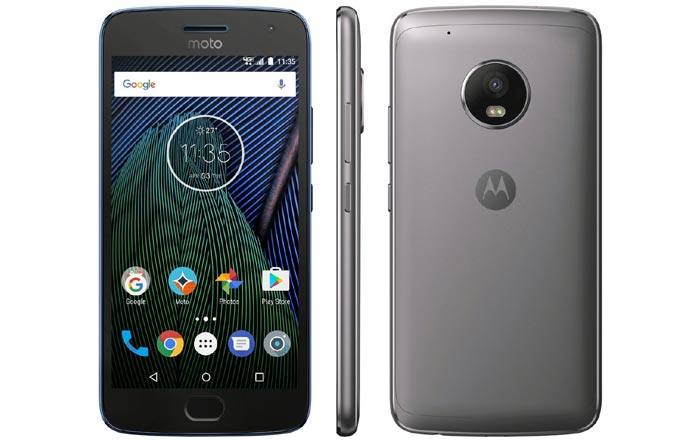 Moving on to the Moto G5 Plus, the handset’s official press render has been leaked by frequent tipster Evan Blass. He notes that the photo is of the Verizon edition of the handset, confirming a tie-up with the telecom brand.

Previous speculation has indicated that the Moto G5 Plus might sport specs like a Snapdragon 625 SoC, 64GB of ROM, 2GB of RAM, 12MP rear camera, and 5MP front snapper.