The Moto G5 and Moto G5 Plus have become the centerpiece of a massive leak which reveals pretty much everything there is to know about the two. A Spanish retailer had listed the handsets ahead of time on its website before pulling the pages down.

Before going down, the pages had showcased a complete list of specifications and promotional images for the Motorola phones. Both look similar, featuring metal bodies with a high-grade aluminum finish. Common features include a fingerprint scanner, a water repellent coating, Gorilla Glass 3, Android 7.0 Nougat, 2GB of RAM, and a 5MP selfie camera.

Taking a closer look at the Moto G5, the smaller variant of the two measures 5-inch and outputs a 1080p resolution. It’s gotten hold of a removable 2800mAh battery that’s accompanied by a rapid charger and is supposed to last all day. The handset’s 13MP rear camera has been blessed with PDAF and LED flash.

Also Read: Moto G5 to be cheaper than Moto G4

The Moto G5 runs on a 1.4GHz Snapdragon 430 processor that’s supported by 32GB of ROM. On the other hand, the Moto G5 Plus gets a 2GHz octa-core Snapdragon 625 SoC and 64GB of ROM. The larger model also boasts of a 12MP primary snapper with Dual Autofocus Pixels for fast focusing and support for the brand’s TurboPower technology. 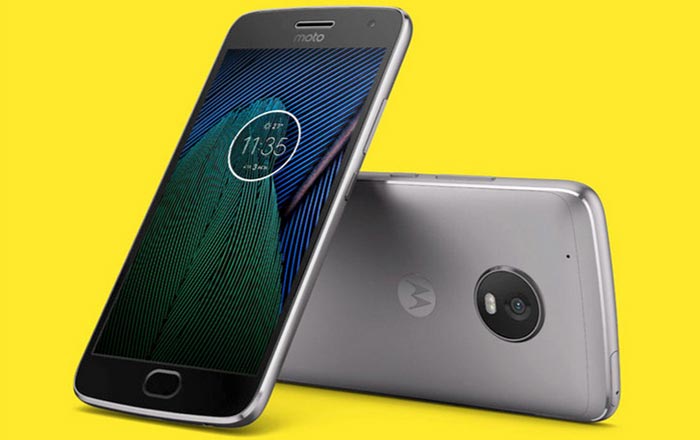 Moto G5 Plus rumored specs at a glance:

Motorola is set to officially out the Moto G5 and Moto G5 Plus at a pre-MWC 2017 event on February 26.