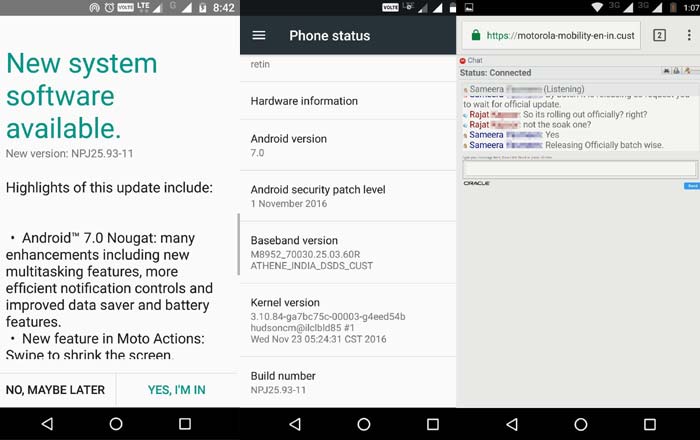 The Moto G4 and Moto G4 Plus are finally getting promoted to Android 7.0 Nougat a few months after the update supposedly became official. A small number of Indian users claim that they’ve begun receiving the OTA software upgrade for the OS.

To recall, Motorola began soak testing Nougat for Brazilian units of the Moto G4 and Moto G4 Plus back in October this year. This was followed up by the brand posting the release notes for the Android 7.0 update on its Indian website. This naturally lead people to believe that the two would be getting updated soon.

However, no OTA upgrade came along after all, leading to a great deal of confusion. This period of uncertainty may now be at an end since a handful of users are now reporting that they’re now getting version NPJ25.93-11 of the company’s firmware which brings Nougat with it.

An Android Police reader even double checked with Motorola’s live chat support to determine whether or not this was a verified release or soak test. The rep confirmed that it’s rolling out Android 7.0 officially batch wise.

Motorola had previously said that the Moto G4 and Moto G4 Plus would get new abilities like being able to activate a new swiping action to instantly shrink the screen and a fingerprint sensor for screen lock tool. Nougat of course brings its own truckload of improvements to the table such as multitasking and an enhanced data saver.