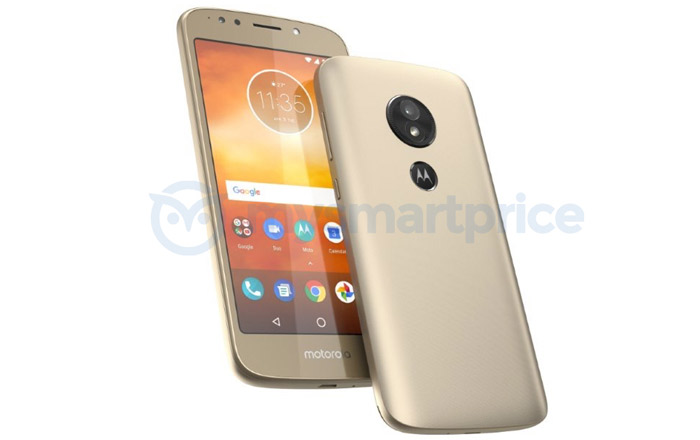 The Moto E5 has gotten leaked online in the form of an image showing off its front and back. The handset doesn’t appear to be too much of a radical departure from its predecessor, although there is one particularly interesting aspect which hasn’t been seen in any Motorola phone till date.

We’re talking, of course, about the fingerprint sensor at the back of the so-called Moto E5. It seems the company has merged the handset’s logo with the scanner so that it serves a dual purpose. This makes sense to a certain extent since the brand is known for its signature rear-facing dimple where its symbol usually sits.

The new design blends this classic look with a more modern purpose. The Moto E4 notably featured a home button up front which doubled up as a fingerprint reader and a flat Moto batwing logo at the back. The home button has disappeared in the image up front, leaving nothing but a thick bezel with ‘motorola’ emblazoned across it.

Also Read: Moto G5S Plus gets a price cut

It remains to be seen how consumers react to these possible changes. It might have been nice if the screen had expanded to take advantage of the gap left behind, but that might be too much to expect from a budget series like the Moto E.

Looking to the bottom, there seems to be a microUSB port and not a USB Type-C one. A single camera and LED flash unit sits at the rear within a prominent casing. Rumor has it that Motorola is granting the handset a metal body this year. It might launch the device on April 3 if the date on the screen above is any indication.