These past few days have seen a lot of speculation related to the mystery Motorola smartphone which the company will be unveiling simultaneously in New Delhi and London, and we now have word that could indeed be called the Moto E. The ambiguity regarding its price has also been cleared up a little by a new leak.

All that secrecy Motorola has been keeping has come crumbling down owing to a listing on an import data website named Zauba. Spotted by AndroidOS, this listing shows that 1,300 units of the Motorola Moto E have been imported into India on May 3. All these phones are shown to feature 4GB of internal memory and are white in color. 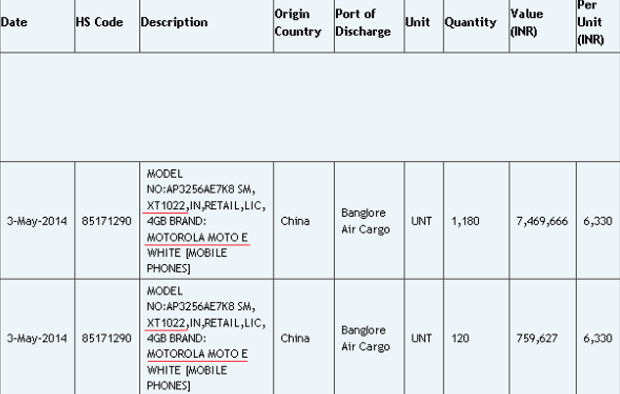 Their price per unit has been revealed to be Rs 6,330, but before you jump up in joy, it’s important to note that this is an import price which usually excludes the duties and taxes. This means the actual retail cost of the Moto E could be higher than this, but we’re certain that it will be below the Rs 10,000 mark.

The model number of the imported Moto E smartphones is XT1022. As we’ve learnt through an earlier report, this is a dual SIM variant of the device which is logical considering that the Indian market has such a high demand for a second SIM slot.

We can certainly expect the star of Motorola’s May 13 event to be the Moto E. We’ll have everything covered about this smartphone, so stay tuned if you’re interested.

Here’s a look at the leaked specs of the Moto E: