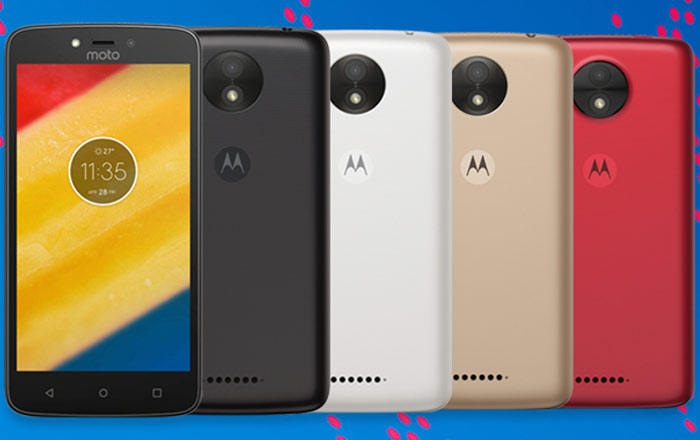 After a flood of leaks, Motorola’s finally ready to unveil its all-new affordable C series of smartphones. The lineup consists of the Moto C and Moto C Plus and is set to hit markets in Latin America, Europe and Asia Pacific this spring.

The Moto C and Moto C Plus look nearly identical on the outside but offer very different specs on the inside. Starting off with the former, its 3G/1GB/8GB variant is priced at €89 (roughly Rs 6280). Opting for the 4G/1GB/8GB version will raise the cost to €99 (approx Rs 6980).

Motorola’s marketing the new C series as essential phones that boast of robust battery lives. In the case of the Moto C, fuel is supplied by a 2350mAh removable battery. The device gets things done with the help of a 1.1GHz quad-core MediaTek MT6737M processor and 1GB of RAM.

Buyers of the Moto C can choose between 8GB or 16GB of internal storage, with further expansion up to 32GB possible via a microSD card slot. As for its photography skills, a 5MP camera rests on its back and a 2MP shooter on its front. Each comes with its own LED flash unit and fixed focus.

The Moto C offers a pretty basic 5-inch FWVGA (854 x 480p) screen and runs on Android 7.0 Nougat, a definite plus point given the numerous entry-level phones which still run on Marshmallow. Motorola hasn’t stated whether further OS updates are in the handset’s future.

A quick look at the specifications of the Moto C Plus:

Moving on to the Moto C Plus, the handset is similar to its counterpart but improves upon it in the resolution, camera, battery, SoC, and RAM departments. The battery is where it really shines since the 4000mAh unit is supposed to last for 30 hours on a single charge.

The Moto C Plus starts at €119 (about Rs 8390) for its 1GB/16GB model. We’ll keep you updated the moment more information about the series’ availability gets announced.