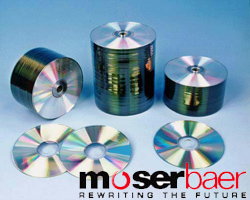 In an effort to venture into the entertainment industry via the home video market, Moser Baer India launched a new initiative in content distribution.

Moser Baer India will release video content on DVD and VCD formats using its proprietary and patented technology, which improves quality and in turn reduces cost drastically. The company will be creating content in edutainment and devotional categories as ‘made-for-DVD-films’. In addition, mainstream Hindi movies will also be a part of the company’s plan.

According to Yogesh Mathur, group CFO, “This initiative represent an excellent opportunity to leverage our optical media strengths in patented and proprietary technology, capacity and costs enabling us to offering high quality titles at very attractive price points between Rs28 and Rs34 for VCDs and DVDs. I believe that at these price points we will redefine the home video market in India.”

The company will spend up to 5 billion rupees over a couple of years in the initiative and plans to acquire copyrights and licenses for 7,000 movie titles, Executive Director Ratul Puri said.

Moser Baer India would sell films on compact discs for 28 rupees each and DVDs for 34 rupees, Puri said but declined to elaborate how the acquisition cost of the film rights would be factored into the prices.

Apparently, the company’s new division is in discussions to acquire copyrights and exclusive licenses of more than 7,000 titles in all major Indian languages, which comprises a third of all movies produced till date in India.

Harish Dayani, Chief Executive Officer of Entertainment Business, Moser Baer, explained that their goal by end 2007 is to own exclusive copyright licenses of 40 percent mainstream Hindi films ever produced in this country. By end of 2008, they expect the figure to reach 50 per cent. They will also be looking at buying copyrights of as many new films that are released.

Dayani further added that this initiative is poised to bring a paradigm change in the home video market, which they believe will lead to much higher consumption of content on home video, and encourage people to build libraries.

Moser Baer India is also looking at having a presence in the home video market in countries that are suffering high levels of piracy.

According to research, India has over 26 million DVD / VCD users, growing at a healthy clip of over 25%, and comprising about a fourth of all TV ownership in the country. Despite the huge potential market, home video accounts for a mere 7% of the total film revenues of Rs 7,900 crore. The US home video market is almost the same revenue size as that of the theatrical market.