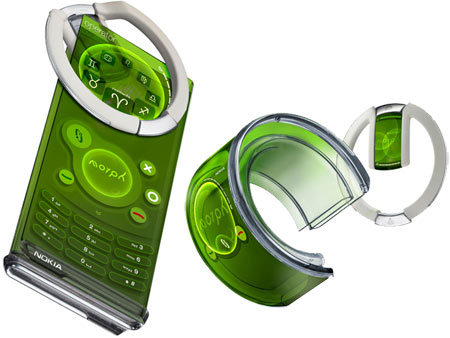 These days a number of concept phones are in development and it seems that with time the designs just keep getting more futuristic while maintaining simple functionality. One such phone is the newly unveiled Morph, which has been developed by Nokia Research Center and the University of Cambridge (UK). It is indeed a perfect marriage between art and science.

The Morph device’s specialty is that it works on the principle of nanotechnology. It also looks really flexible, and this is exactly what Nokia wishes to demonstrate through this phone. The phone shows how future devices might be stretchable and flexible, allowing users to transform their phones into radically different shapes.

Professor Mark Welland, Head of the Department of Engineering’s Nanoscience Group at the University of Cambridge and University Director of Nokia-Cambridge collaboration added, “Developing the Morph concept with Nokia has provided us with a focus that is both artistically inspirational but, more importantly, sets the technology agenda for our joint nanoscience research that will stimulate our future work together”

It is known that the Morph phone concept could become a reality only in seven years from now. Also, such nanotechnology elements will be available only in high-end models in the distant future.

However, the Cambridge researchers believe that nanotechnology could one day lead to lower manufacturing costs and could also offer the possibility of integrating complex functionality at a low price.

Nokia and the University of Cambridge UK began working on this phone in March 2007. This phone is being showcased at the Museum of Modern Arts (MoMA) in New York from February 24 through May 12, 2008.