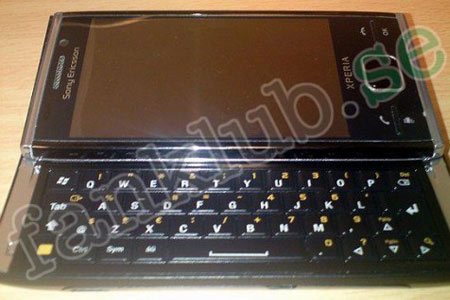 In the past week we saw a number of leaked images and details about Sony’s apparently upcoming Xperia X2 phone. The web terrain now seems to have got hold of more live images and supposed specification details of the smartphone, reports Slashgear. (Image Credit: FanKlub.se)

Apparently the latest rumor reveals the phone to be bundled with an 8.1 megapixel camera. The camera is expected to have the autofocus function along with a video recording time of 30fps.

Another tentative feature of the Xperia X2 is a 3.5” WVGA OLED touchscreen. The phone will supposedly be based on the custom version of the Windows Mobile 6.5 operating system. This platform is claimed to be designed specifically for Xperia’s hardware.

While there are no details about the CPU, it is expected to be much faster than X1’s Qualcomm MSM7200A 528MHz chip. Coupled with 512MB of RAM, the phone should also be loaded with features like A-GPS, a 3.5mm headphone socket and an accelerometer.

Leaked images of the alleged phone reveal a slide-out QWERTY keyboard. Also the company’s Xperia Panels appear to be surfacing through. Users can also expect them to be compatible with Windows Mobile 7 platform incase they plan to upgrade.

The price and availability of this highly-anticipated smartphone are not known.