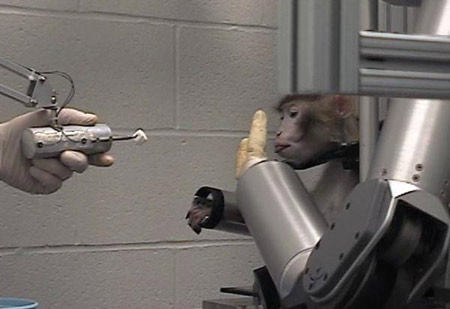 Robotic research has stepped forward with the successful experiment of a monkey’s brain signals controlling a robot arm. Researchers from the University Of Pittsburgh School Of Medicine report in the journal Nature that the university’s trained monkey successfully fed itself with fluid, well-controlled movements of a human-like robotic arm by using only signals from its brain.

The monkey at the lab was able to move a robotic arm to feed itself marshmallows and chunks of fruit with robotic hands. The monkey’s hands were restrained. The computer software interprets signals picked up by probes, the width of a human hair. These probes are then inserted into neuronal pathways in the monkey’s motor cortex. Cortex is a brain region where voluntary movement originates as electrical impulses. The collective activity of neurons is then evaluated using the special software. This software is especially programmed with a mathematic algorithm, which then passes the message to the arm and it undertakes the action.

The experiment also proved that the movements of the robot arm were fluid and natural. Also, researchers acknowledged that the monkeys come to regard the robotic device as part of their own bodies.

“Our immediate goal is to make a prosthetic device for people with total paralysis,” said Andrew Schwartz, Ph.D., senior author and professor of neurobiology at the University of Pittsburgh School of Medicine. “Ultimately, our goal is to better understand brain complexity.”

This method would benefit patients going through various diseases like spinal cord injuries and those with “locked-in” conditions such as Lou Gehrig’s disease, or amyotrophic lateral sclerosis. Paralytic patients will also be benefited by this method.